Catalogue of the Pictures at Leigh Court, near Bristol... with Etchings from the whole Collection...and accompanied with Historical and Biographical Notices. By John Young, Engraver in Mezzotinto to his Majesty and Keeper of the British Institution 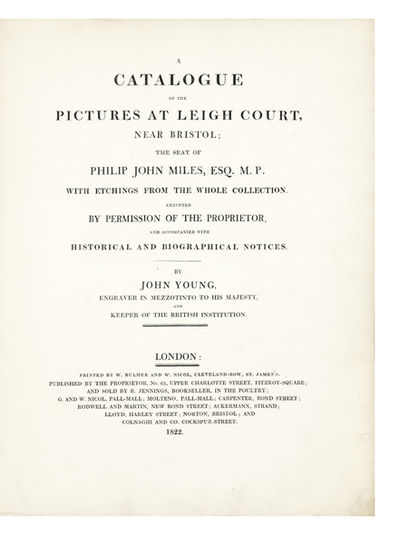 by (MILES, Philip John)
81 etchings on 33 plates. 4 p.l., 32, [2] pp. Large 4to, orig. half-red morocco & marbled boards, (spine expertly rebacked, new endpapers), spine gilt. London: W. Bulmer & W. Nicol, 1822. An uncommon catalogue. Miles (1774-1845), "typifies the new class of merchant, having made his money financing the building of railways and of the Avonmouth docks. Miles bought Leigh Court, near Bristol, for which he assembled an extraordinary collection of works attributed to Leonardo da Vinci, Correggio, the Carracci, Guercino, Van Dyck and a Giorgione now in the National Gallery, London, but his fame rests on the purchase of the Altieri Claudes from the Beckford collection. The pictures were later ruined by inept cleaning and by the time the American oil tycoon Lord Fairhaven bought them for Anglesey Abbey in 1947, they were only a shadow of the pictures that had caused such a stir when Beckford brought them to England."-Stourton & Sebag-Montefiore, The British as Art Collectors, p. 163. The collection of paintings was dispersed in two sales in 1884 and 1899. John Young (1755-1825), a skilled engraver who executed the present work's illustrations, was entrusted with the cataloguing of several other significant collections, including those of Robert Grosvenor, 2nd Earl Grosvenor; John Julius Angerstein; Sir John Fleming Leicester; and Lord Stafford. The 81 paintings are all illustrated on the plates. Very good copy, with prices, names of buyers, and, for some, extensive notes. It is possible that the notes were written by a member of the Miles family. A few of the plates are slightly foxed. ❧ Op. cit., p. 326-27-(John Young). (Inventory #: 6043)
$950.00 add to cart or Buy Direct from
Jonathan A. Hill, Bookseller
Share this item
Jonathan A. Hill, Bookseller, Inc.
Offered by


(click for more details about [From upper cover]: Artform)
View all from this seller>