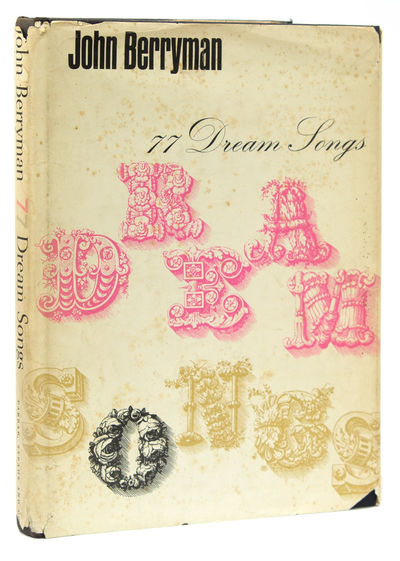 by Berryman, John
New York: Farrar, Straus and Company, 1964. First edition. xi, [i], 84 pp. 8vo. Publisher's black cloth. Spine ends faded, in chipped and foxed dust-jacket by Marshall Lee. First edition. xi, [i], 84 pp. 8vo. Inscribed. First edition, presentation copy, with a lengthy, pre-publication inscription on the front free endpaper, "To Anne, and to Chris - if, as Kate & I hope without knowing anything about it, you have got together again. We were bitterly sorry to hear - from William, not in the least as gossip - of your separation. Whatever is happening or does, let me wish you a restoration of the happiness I so admired in you on Mr. Frost's last summer. Affectionately, John. The Abbott Hospital, Minneapolis, Minn. 22 April '64." Berryman writes from the Abbot Hospital, where he often went to recover from the effects of his heavy drinking. Anne and Chris - and Robert Frost - are mentioned in Dream Song 38, which begins, "The Russian grin bellows his condolence / tó the family: ah but it's Kay, / & Ted, & Chris & Anne ..." 77 Dream Songs was published on 27 April 1964 and was awarded the Pulitzer Prize in May 1965. Stefanik A11.1.a (Inventory #: 310091)
$5,000.00 add to cart or Buy Direct from
James Cummins Bookseller
Share this item
James Cummins Bookseller Inc.
Offered by

Vp 1865
(click for more details about Album of clipped signatures of Union and Confederate officers, Civil War songsheets and a few unmounted cdvs)

Laws of the State of Missouri, passed at the Regular Session of the Twenty-Second General Assembly

Jefferson City : J.P. Ament, Public Printer , 1863
(click for more details about Laws of the State of Missouri, passed at the Regular Session of the Twenty-Second General Assembly)
View all from this seller>