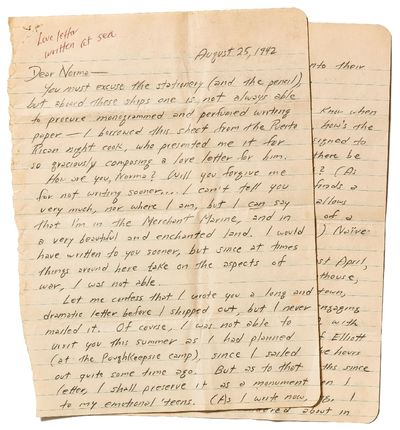 Unbound
by KEROUAC, Jack
Unbound. Near Fine. An early Autograph Letter Signed from Kerouac to his then-girlfriend, Norma Blickfelt, written when he was 20 years old and serving on board a Merchant Marine ship during World War II, reflecting on his life and foreshadowing much of what he would later become famous for. Two lined sheets written in pencil on both sides, totaling four pages, and later annotated by Kerouac on the first sheet in red ink: "Love letter written at sea." Overall very good or better with light creasing from being mailed, staple holes at the corner of both sheets, and each with the same uneven margin from being torn from a notebook.

Kerouac joined the Merchant Marine in the summer of 1942 and served on board the S.S. *Dorchester* bound for Greenland transporting a submarine repair crew. He relates the experience in *Vanity of Duluoz*, along with a failed torpedo attack on the ship. He had joined as both a patriotic gesture during the war and also as a way to make money so he could afford to go back to Columbia University in the fall. As it turned out, he "misjudged the length of the voyage" and would not be back in time for the fall semester. Soon after his return to New York in late October he learned that the *Dorchester* was sunk by another torpedo attack on its very next voyage, with several hundred lives lost. Kerouac enlisted in the regular Navy, but had a short tenure there: he later wrote that he asked them for an aspirin and they gave him a poor health discharge.

The letter is both self-consciously literary - Kerouac writes for effect, clearly -- and also touches on his interests, readings, and aspirations: "The little Morro cook sits beside me eating oatmeal and Spanish chicken rice... it is morning, a grey drizzling dawn prevails, etc., etc. ... I'm studying like mad on this ship - Outline of History, the Roman writers, some classics, Thomas Mann (what a Humanist!) and the Shadow Magazine. ... But what romance! ... to stand on a deck bare-chested at dawn, and to listen to the pulse-beats of the ship's great, idle engine -- Wolfe's 'morning and new lands...'."

Kerouac writes that as soon as he returns from the trip he will take a room in the Village "to write like mad" and will call Norma and "if Saroyan's on Broadway and the Russian restaurants go on tinkling songs of home while Russians weep into their vodka, we'll take that in together." He quotes Budd Schulberg then reminisces about their (his and Norma's) time together - "Third Avenue (our penthouse, our little song), the Bowery, Chinatown, Union Square, the Harbor and your engaging German singing..." - and then about a trip he took down South after that where he "wandered about in my own lonely way, from city to city, village to village, listening to the Negros sing the blues, eating and working in lunchcarts, hopping freights and listening to the great American music of a train whistle... And stories -- I've millions of them, all ready to pop out. Now, more than ever, do I want to write."

He writes about "the Genius of poetry (as Thoreau would have put it)" and about his own being "frank, or egotistical & vain, or all three" but doesn't apologize and says, "I don't remember Whitman being self-depreciating, nor Wolfe with his long hours at the mirror, nor Saroyan indeed, nor Joyce, etc... ." He concludes by saying that "if anybody tells me I'm disillusioning myself, or harboring 'pretenses to a higher mentality,' or even 'trying to rise from the people,' as my father claims, I'll tell them they're damned fools and will go on writing, studying, travelling, singing, loving, seeing, smelling, hearing, and feeling... Write to me, Norma; I miss you." He gives his address and signs the letter "Yours ever, Jack."

Aside from a few letters to his longtime hometown friend, "Sammy" Sampas, and another to his sister after he helped their parents move to New Haven in 1941, this is apparently one of the earliest letters that Kerouac sent that still survives.

A wonderful glimpse of the young Kerouac's own blueprint for his life, from his formative years, touching on the major themes that defined his life and work. (Inventory #: 422509)
$22,000.00 add to cart or Buy Direct from
Between the Covers Rare Books
Share this item

Lonson : Secker & Warburg , 1986
(click for more details about Ice and Fire)
View all from this seller>