The English Rogue: Described, in the Life of Meriton Latroon, a Witty Extravagant, Being a Compleat History of the Most Eminent Cheats of Both Sexes 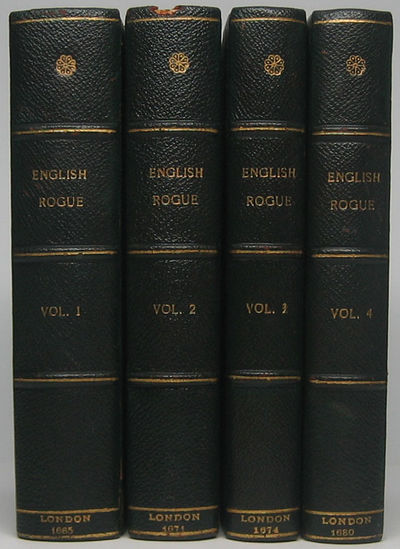 by HEAD, Richard, and KIRKMAN, Francis
London: Henry Marsh, 1665. Hardcover. Complete 4-volume set. 12mo. Quarter dark green calf with gilt spine lettering and raised bands and green patterned cloth. xvii, (5pp), 471pp; (24pp), 378pp; (4pp), 304pp; (6pp), 324pp. Top edges gilt. Frontispieces (Volumes 1 and 3), full-page plates, marbled endpapers. Very good. Faint edgewear only. Superb, handsome copy in custom binding of the first English novel translated into a continental language (German). Bibliographically cryptic, as this clearly isn't the true first edition, but rather a late 19th century facsimile that some sources date at 1874. Francis Kirkman is given as the publisher for the 1671 second volume, the 1674 third volume and 1680 fourth volume -- all of which Head denied any association with, claiming the first volume only as his. The true first edition is rare and this later facsimile also scarce. (Inventory #: 43339)
$275.00 add to cart or Buy Direct from
Main Street Fine Books & Mss.
Share this item

New York : Mason Brothers , 1864
(click for more details about General Butler in New Orleans. History of the Administration of the Department of the Gulf in the Year 1862: With an Account of the Capture of New Orleans, and a Sketch of the Previous Career of the General, Civil and Military)
View all from this seller>