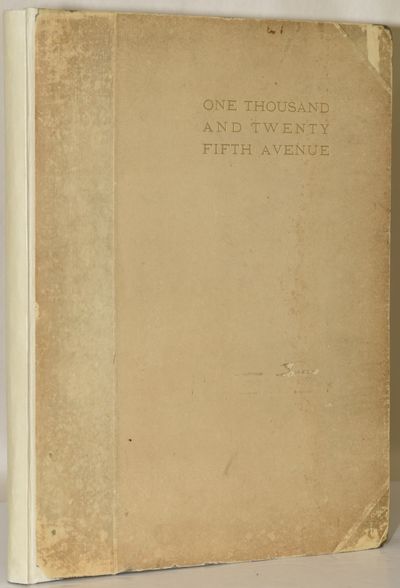 by [William Salomon] | Lillian Baynes Griffin
New York: [William Salomon], 1912. First Edition. Very Good binding. The only book of photos by forgotten New York photographer Lillian Baynes Griffin, who was featured in Harper's Weekly, the New York Press, New York Times, Vanity Fair, and Vogue, and famously convinced royalty and plutocrats to pose for her alone. Trained at the New York Institute for Artist Artisans, Griffin ventured into photography despite, what she referred to as, the 'little opportunity' for women in the trade. This tome contains 56 photos by Griffin detailing Salomon's home at 1020 Fifth Avenue. Originally the home of Richard Arnold, it was purchased around 1900 by Salomon, who was Chairman of the Board of the Baltimore and Ohio Railroad. Salomon spent many years creating essentially a new and more impressive home, buying two adjacent lots and greatly expanding what was already, by the standards of most, a mansion. Half-bound in Japan Vellum over paper-covered boards. This copy has a discreetly replaced spine in Japanese tissue. It is mildly ex-library with a few small marks to the preliminary pages. There are no marks at all to the 56 photogravure plates. Very Good binding. (Inventory #: 282154)
$1,200.00 add to cart or Buy Direct from
Black Swan Books
Share this item

CONVERSATIONS OF A FATHER WITH HIS SON, ON SOME LEADING POINTS OF NATURAL PHILOSOPHY: Designed for Schools and Families to Illustrate the Perfections of the Deity and to Expand the Youthful Mind

New York : N. B. Holmes , 1833
(click for more details about CONVERSATIONS OF A FATHER WITH HIS SON, ON SOME LEADING POINTS OF NATURAL PHILOSOPHY: Designed for Schools and Families to Illustrate the Perfections of the Deity and to Expand the Youthful Mind)
View all from this seller>