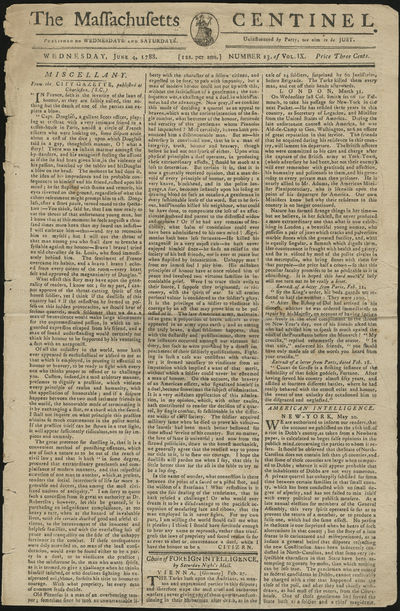 "The complete restoration, and perfect establishment of peace and tranquility, within the State, leaves me but little to offer, except my most cordial congratulations on these interesting and important events...

It is with pleasure that I find so large a part of the domestick debt of these United States in a way to be discharged by the sale of the Federal lands… I should be happy, Gentleman, if some system could be adapted to place the remaining part of our State debt on such funds as could prevent the extreme fluctuation in its value, which is in my opinion as injurious to the government, as it is mortifying, and destructive to the public creditor. I shall only remark that the necessity of such measures, is increased by the prospect of the new federal Constitution being adopted. As in consequence of this important event, the resources which have been hitherto applied to the purposes of this government in particular, will probably be appropriated to federal objects – should this event take place, the securities of this State would sustain a sudden and rapid depreciation unless prevented. – It becomes our duty therefore on every principle of prudence and justice, to guard against such a public misfortune, and I hope it may be done without the addition of another tax… [p2 c1]

[Describing a meeting at Faneuil Hall]

At the head of the Hall, we're seven PILLARS of wreaths... emblematic of the seven states which have adopted the federal Constitution – on the key-stones of the arches of which were painted in large characters, the names of the states: and behind them were six figures, almost as large as life, of their Excellencies the President of the Federal, and Massachusetts Conventions… After dinner the following toasts were drank:

1. The governor and Commonwealth.

3. The states which have adopted the Constitution

4. Speedy completion of the Federal Edifice.

5. Louis XVI, our illustrious ally, and the friendly powers of Europe

8. The Militia of Massachusetts

9. May our citizens prize the honor of being soldiers, and our soldiers never forget that they are citizens

12. The president, and University of Cambridge. [Harvard]

13. Freedom and peace to all mankind.

When the 7th toast was drank, Mr. Rae, sung "God save great Washington," in his usual style of excellence...

In his second, non-sequential term as Massachusetts Governor, John Hancock addresses his state's legislature upon re-election to another annual term. The bulk of his message concerns the impending ratification of the federal Constitution (New Hampshire's approval just over two weeks later would complete the passage with the required nine states) and the causes that necessitated its creation. The return to "peace and tranquility"
referenced not only the fight for ratification, but also Shays's Rebellion, an early tax revolt in western Massachusetts that demonstrated the weakness of government under the Articles of Confederation. Shays's Rebellion made clear the need to reform the central government and form a constitutional union, which in turn led to a blistering debate in Hancock's state. Massachusetts finally ratified the Constitution in February 1788 after Hancock and fellow patriot Samuel Adams endorsed it, along with the scheme to service the public debt through sale of federal lands that was crucial to the Constitution's success.

Also includes reports of ratification disputes in North Carolina, the South Carolina Ratifying Convention, the election of officers to the Massachusetts Ancient Artillery Company at their dinner, including a list of toasts, and a resolution returning two Revolutionary War cannon to Massachusetts, among the usual period advertisements. (Inventory #: 20650.31)
$450.00 add to cart Available from Seth Kaller
Share this item