The Only Abraham Lincoln Letter to his Fiancée Mary Owens Still in Private HandsLong on Politics, Short on Love 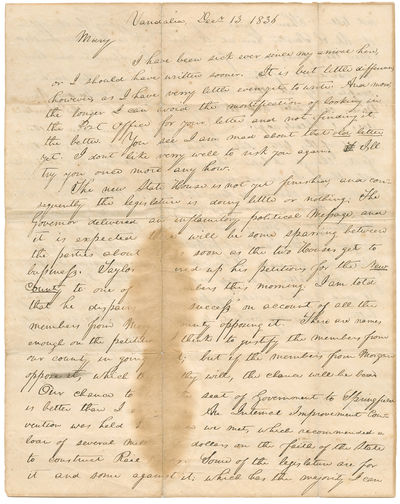 by ABRAHAM LINCOLN
1836. No binding. Fine. Autograph Letter Signed, to Mary S. Owens, December 13, 1836, 2 pp., 9 3/4 x 7 3/4 in. ""Write back as soon as you get this, and if possible say something that will please me, for really I have not been pleased since I left you.""Here, Lincoln perfectly demonstrates what Owens later described as deficiencies ""in those little links which make up the chain of a woman's happiness."" Rather than expressing his feelings for Owens, Lincoln complains about his health and discusses political issues swirling in the Illinois General Assembly. Although inept at love, the letter offers rare insight into the young representative's thoughts on a variety of political issues. In this highly important letter to Mary Owens, a self-absorbed Lincoln complains to his potential spouse of his health, both physical and mental, and discusses political issues to the point that he describes his own letter as ""dry and stupid."" Perhaps more revealing than he realized, it illustrates the tension in Lincoln's early life between matters of the head, with which he was comfortable, and matters of the heart, with which he clearly was not. Complete Transcript Vandalia, Decr 13. 1836Mary I have been sick ever since my arrival here, or I should have written sooner. It is but little difference, however, as I have verry little even yet to write. And more, the longer I can avoid the mortification of looking in the Post Office for your letter and not finding it, the better. You see I am mad about that old letter yet. I dont like verry well to risk you again. I'll try you once more anyhow. The new State House is not yet finished, and consequently the legislature is doing little or nothing. The Governor delivered an inflamitory political message, and it is expected there will be some sparring between the parties about it as soon as the two Houses get to business. Taylor delivered up his petitions for the New County to one of our members this morning. I am told that he despairs of its success on account of all the members from Morgan County opposing it. There are names enough on the petitions, I think to justify the members from our county in going for it; but if the members from Morgan oppose it, which they say they will, the chance will be bad. Our chance to take the seat of Government to Springfield is better than I expected. An Internal Improvement Convention was held here since we met, which recommended a loan of several millions of dollars on the faith of the state to construct Rail Roads. Some of the legislature are for it and some against it; which has the majority I can not tell. There is great strife and struggling for the office of U.S. Senator here at this time. It is probable we shall ease their pains in a few days. The opposition men have no candidate of their own, and consequently they smile as complacently at the angry snarls of the contending Van Buren candidates and their respective friends, as the Christian does at Satan's rage. You recollect I mentioned in the outset of this letter that I had been unwell. That is the fact, though I belive I am about well now; but that, with other things I can not account for, have conspired and have gotten my spirits so low, that I feel that I would rather be any place in the world than here. I really can not endure the thought of staying here ten weeks. Write back as soon as you get this, and if possible say something that will please me, for really I have not been pleased since I left you. This letter is so dry and stupid that I am ashamed to send it, but with my present feelings I can not do any better. Give my respects to Mr & Mrs Abell and family. Your friend LincolnMiss Mary S. OwensHistoric BackgroundThis is one of the ten oldest Lincoln letters known to have survived. Although 11 leaves (9 of which are in institutions) from Lincoln's educational sum book, a few documents written or signed by Abraham Lincoln in 1832 relating to his service in the Black Hawk War (again, mos... (See website for full description) (Inventory #: 24346.99)
$375,000.00 add to cart Available from Seth Kaller
Share this item