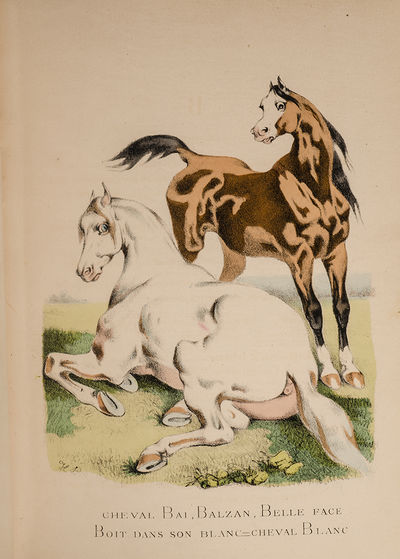 by PINEL, HonorÃ©
Paris: Librairie Ducrocq, 1869. Practical Knowledge of the Horse
With Seventy-Two Colored Lithograph Plates on all Aspects of the Horse

The author states that the alphabetic form which he has adopted has a twofold aim:
1. To facilitate the child's study of the horse, because the dictionary form is more favorable for those whose attention span is quickly tired, or those who can only study at intervals.
2. To offer to the amateur an explanatory lexicon of the usual words used by the horseman.

Three parts in one volume, each in the form of an ABC. The first devoted to 'Dresses and brands', the second to 'conformations, flaws, and injuries', and the the third on 'The races'. Text on the left page, and color lithographed illustration on the right page.

Variorum Edition of the Poems of W.B. Yeats, The

New York: The Macmillan Company, 1957
(click for more details about Variorum Edition of the Poems of W.B. Yeats, The)