Sympathy for the Devil (excerpt) 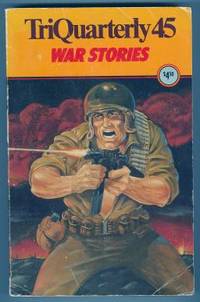 by Anderson, Kent
Evanston: Northwestern University Press, 1979. Excerpt from the then forthcoming novel in "TriQuarterly 45," Spring, 1979. The "War Stories" issue. 50pp beginning with Chapter One. Signed by Anderson at his contribution. Contributors include Jay Cantor, W.D.Ehrhart, Jay Neugeboren, et al. Shallow creases and edgewear. Very Good condition. Anderson's first publication and, thus, the first appearance in any form of his first novel which was published by Doubleday in 1985 but at the time of this appearance Houghton-Mifflin held the contractual rights to the novel-in-progress.. Signed by Contributor. First Edition. Soft Cover. Very Good/Not Issued. 8vo - over 7¾" - 9¾" tall. Magazine. (Inventory #: 120675)
$125.00 add to cart or Buy Direct from Revere Books
Share this item
Revere Books
Offered by

Any book may be returned for any reason within two weeks of receipt for a full refund of the purchase price with prior notice. Shipping in US is by either USPS priority or media mail at buyer's option; outside of US shipping is by USPS standard or global priority air. Books shipped to a PA address are subject to the PA sales tax. VAT and other international shipping fees are the responsibility of the buyer. For unclaimed packages all shipping charges will be retained by the seller. All books subject to prior sale. Orders shipped boxed and bubblewrapped with USPS delivery confirmation.
More from this seller

THE BEST AMERICAN SHORT STORIES OF THE CENTURY

Boston : Houghton Mifflin , 1999
(click for more details about THE BEST AMERICAN SHORT STORIES OF THE CENTURY)

Buffalo : Frontier Press , 1955
(click for more details about PEACE EYE)
View all from this seller>