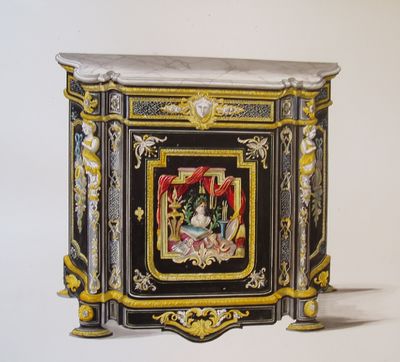 by Archambaut, A - FRENCH FURNITURE DESIGNS
Paris: Not published., ca 1860. Original three quarter leather over cloth.. Very good; joints chafed.. Oblong folio album (sheet size 385 x 265 mm) with 138 watercolor renderings (heightened in gum arabic and retaining a bright, fresh finish) of tables, consoles, bed side tables, chairs, writing desks, work tables, cabinets, buffets, clocks, etc. There are an additional pair of renderings from a smaller album that are inserted; these retain what appear to be autograph stock number and measurement notations. The drawings measure appx. 150 x 190 mm.; some are smaller and two to a page. Most are drawn directly on the album page (thick, glazed sheets of paper); a few are drawn on paper and mounted to the album sheets.

An exquisitely rendered and engaging album of color furniture designs in the style of Louis XIV; most likely a trade catalog. Each design is fully appointed in great detail and with appropriate colors. A Archambaut, who has signed one of the renderings, is designated a furniture designer in the V&A catalog (under the six drawings it holds in its collection). The explanation for the ornate, high style design of the contents of this catalog is given in the last chapter of Madeline Jarry and Pierre Devinoy's book, Le Siège Francais (1973). There, they deftly develop the argument of why there was a renascence in the Imperial style at the time. This domestic demand was augmented by the managed and manipulated international market for French "antiques" (see Diana Davis, The Tastemakers. British Dealers and the Anglo-Gallic Interior, 1785-1865 esp. chapter one). A most uncommon survival. The foundation and evolution of this kind of trade in France from design to 'jobbing' in the eighteenth and into the nineteenth century is described in Carolyn Sargentson's book Merchants and Luxury Markets .... (Inventory #: 17012)
$19,500.00 add to cart Available from
Palinurus Antiquarian Books
Share this item

24 Original Illustrations to the "Pickwick Papers" ....

[London] ca1920
(click for more details about 24 Original Illustrations to the "Pickwick Papers" ....)
View all from this seller>