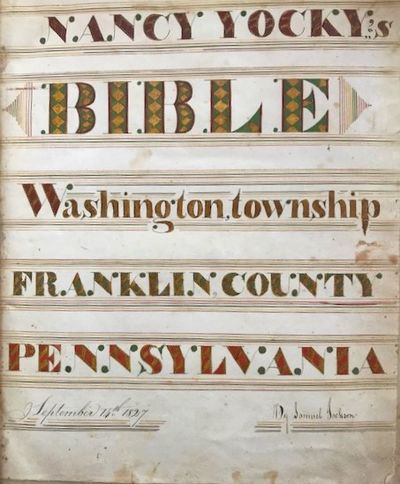 A unique copy of this bible from the Yaukey (Yocky) family.The Goeb printing of Luther's bible in Somerset is historic in itself; especially so given the generous format Goeb chose for his work. What makes this copy unique is the laid-in copies of three printed hymns; two from "Sisters" of the Ephrata Cloister but all originating at Snow Hill. Catherine Redelsberger and Barbara Schneeberger (for whose family farm the Snow Hill sanctuary was named) were among the earliest American women converts to Beissel's Seventh-Day Baptists. Andreas Schneeberger is represented here by a hymn printed at the Cloister on laid paper clearly watermarked CB in a "fluttering heart" (Gravell, #198). It is most likely that the Redelsberger hymn was also printed at the Cloister but there is no watermark. The three broadside printings are: 1] Der Schw. Catharina Redelsberger Glaubens-Lied. Unlocated.2] Geistliches Trauer-Lied, gestellt von Schw. Barbara Schneeberger. Unlocated3] Wurde abgesungen den 31ten August, 1793: Bey B. A. S. auf dem jährlichen Fest, an der Antitum. Printed at the Cloister. Attributed to Andreas Schneeberger. Shipton & Mooney #26144 with the entry taken from Seidensticker and no location provided. There apparently is one copy at HSP. These ephemeral publications were sold through western Pennsylvania by itinerant peddlers or after meetings (see Yoder pp. 42 - 44 barely noting any from the 18th century). Few survive. The three offered here must have been acquired by the Yaukey family 20 years before the Goeb bible was printed and retained for generations within the family. They are spotted and toned and irregularly trimmed. The Fraktur bookplate in the bible is large (285 x 230 mm). It is a geometric lettered design in four colors (green, yellow, red, brown) that is signed and dated: Samuel Jackson, Sept. 14, 1827. In all, an outstanding survival. S & S #27883; Gravell, #198. (Inventory #: 18016)
$7000.00 add to cart Available from
Palinurus Antiquarian Books
Share this item