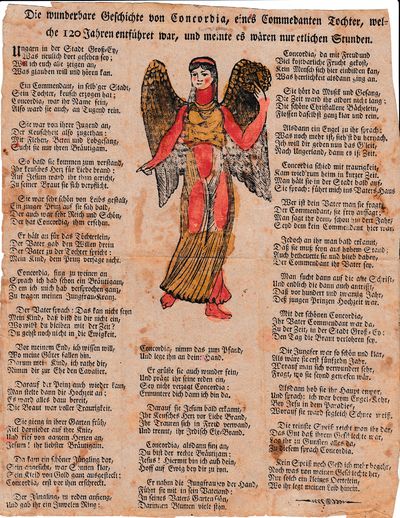 "One of the most unusual of the German ballads ...." The tale is of a girl who visits paradise and returns after what she believes is a few hours but in reality is over a century. According to Yoder this ballad was read, or sung to the tune of the hymn "Mein Gemüt erfreut sich". The story of the human bride-of-Christ can be found as early as the 13th century and has many variants. The broadside has 29 verses (Yoder translates the entire tale for his book) and is decorated with a superb hand colored woodcut of the subject. The ballad has 21 identified variant settings issued by different printers in the first four decades of the nineteenth century. The version offered here has one location at the Free Library of Philadelphia; it is absent from American Imprints. See Yoder, PA German Broadside, pp. 63 - 66; PSU copy (defective) is a much later variant. (Inventory #: 18002)
$4500.00 add to cart Available from
Palinurus Antiquarian Books
Share this item