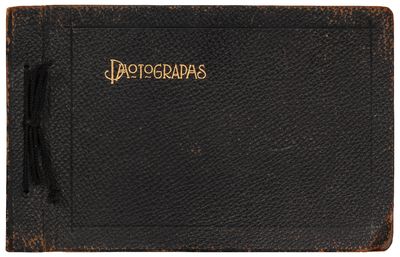 by CHRISTY, Edna
Albuquerque, Catalina, Santa Barbara, Tijuana, Yosemite, Glacier point, Hollywood, Banff, Lake Louise, St. Augustine in California and Mexico, 1920. Hardcover. Very Good. Oblong quarto measuring 11.5" x 7". String tied, black leather boards with gilt print. Contains 106 black and white or sepia toned photographs measuring between 4.5" x 3.5" and 2.5" x 2" with some captions and 17 colored or black and white postcards. Small tears with lightly worn edges, very good with one near fine photograph with a small tear, all other photographs are fine. A young couple's travel album with a larger travel group from Worcester, Massachusetts to California from February to June in 1920. The couple, Mrs. Edna Christy and her husband, visited Albuquerque, Catalina, Santa Barbara, Tijuana, Yosemite, Glacier point, Hollywood, Banff, Lake Louise, St. Augustine, and other places around California and Mexico. Panorama shots are included in the album of hotels and some landscapes. There are also 15 colorful postcards of the places visited. Pictures of mountain landscapes, waterfalls, and several large sequoia trees are included in the album. Some of the pictures feature the couple and their travel group huddled around a fallen tree with the words, "Fallen Monarch," captioned below. Another photograph features the group clasping hands around a large trees base. The couple can be seen driving under the Chandelier Tree in Leggett. They also visited hotel pools and beaches with friends from their travel group. Many of the bathing suits are stylized and show the fashion from the 1920s. During their visit around California, there are pictures of well-known Japanese actor and sex symbol, Sessue Hayakawa. The pictures feature him in costume and performing on set. One photo is captioned, "A Japanese Gentleman," He was the first Japanese actor to achieve stardom in the United States and Europe. Lastly, there are receipts for the couple's travel tickets tipped in the back. An interesting travel album from 1920 featuring photographs from around California, including pictures of Sessue Hayakawa while he was performing in a film. (Inventory #: 423646)
$1400.00 add to cart or Buy Direct from
Between the Covers Rare Books
Share this item
Between the Covers Rare Books, Inc.
Offered by

by Gail and Vicki