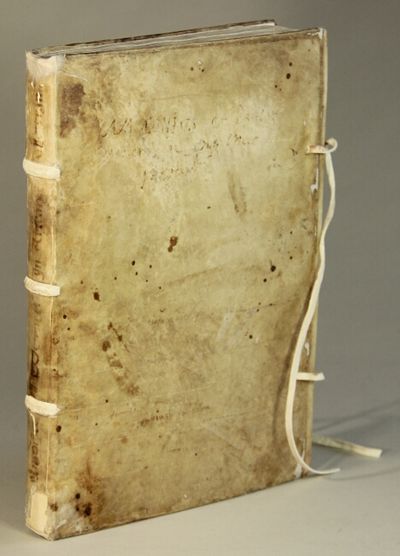 by Ammonius, Hermiae
Venetiis: [Ottaviano Scoto], 1539. Small folio, collating A-E^4, a-r^8, s-t^6, gathering g misbound but all leaves present; vignette title page, three large and many smaller historiated initials throughout; Ottaviano Scotto's printer's mark on final leaf; contemporary full vellum with raised bands on spine neatly restored, leather ties (replaced), and contemporary manuscript text on spine and upper cover, largely worn past legibility; endpapers renewed, ex libris of the Conuentus S. Francisci Vitellianae and Marquis C. L. Cavriani of Mantova, with Cavriani's arms reapplied, occasional underlining and marginal notes in a contemporary hand, in Latin, toning to the top right corner of last dozen or so leaves, very good. Ammonius (ca. c.â440 - c.â520 AD) taught philosophy at Alexandria, where his father Hermeias had taught earlier. Known primarily for his commentaries on Aristotle, which were said to be of greater benefit than anyone else's, he was also distinguished in geometry and astronomy. Himself a pupil of Proclus at Athens, at Alexandria Ammonius taught most of the important Platonists of the late 5th and early 6th centuries (paraphrased from several online sources). Not in Adams. Not in BM-STC Italian. (Inventory #: 51307)
$3,680.00 add to cart or Buy Direct from
Rulon-Miller Books
Share this item