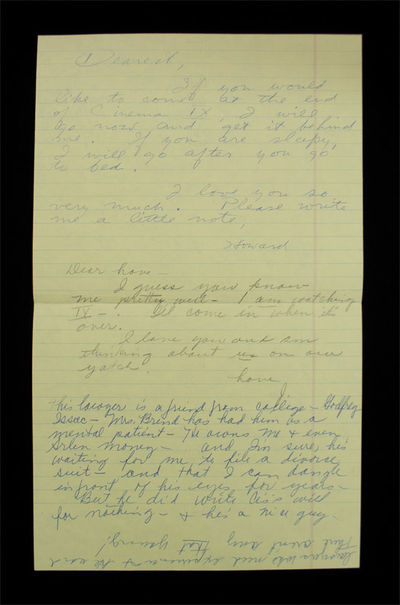 by HUGHES, Howard
Love Notes Written Between Howard Hughes and his Wife Jean Peters [HUGHES, Howard]. ALS to his Wife Jean Peters. [N.P. C. A. 1965]. One sheet yellow lined legal paper (14 x 8 1/2 inches; 355 x 215 mm). At the top of the sheet, a note to Jean, signed "Howard." Just below that note, Jean replied on the same paper and signed it "J". There are a few other notes in Jean's hand related to family issues on both sides of the sheet. On the reverse side along the margin is one line in Hughes' hand which reads "Boats this big are Hell to sell". Sheet with one fold crease. Overall very good. "Dearest, If you would like to come at the end of Cinema IX, I will go now and get it behind me. If you are sleepy, I will go after you go to bed. I love you so very much. Please write me a little note, Howard" [In Hughes's Hand] "Dear Love- I guess you know me pretty well- I am watching IX. I'll come in when it's over. I love you and am thinking about us on our yatch [sic]. Love J" [In Jean Peters's hand] "Boats this big are Hell to sell" [In Hughes's hand] "This lawyer is a friend from college- Godfrey Issac - Mrs. Brend has had him as a mental patient- He owns me & even Arlen Money- and I'm sure, he's waiting for me to file a divorce suit ñ and that I can dangle in front of his eyes for yearsóBut he did write Cis's will for nothing - & he's a nice guy. The only reason for messing with the will is to satisfy the niece- who I am so glad was here when Cis- died- I used to worry that since you were footing all the bills; when she did die, some long lost nephew in Whales would sue for 1,000,000- & say we used her for research or something. But, we're clear on that score because the niece has been the one who talked to the doctor. I donít like to have to go into gyrations ñ it is undignified. Cissie wrote a will- when I lived at Strada Vecchia ñ naming Mel as her exect executrix (not me ñ she didn't trust me to bury her properly. I was very hurt at the time. But anyway, now that she's gone I want the will to be properly probated ñ sp O called the lawyer- because Ben can't find her copy- so I know all she has as an estate is $504.00 in a checking account- The lawyer said "there is a state law that lawyers get only a % of the estate & our office is not interested-" So I said "Well, don't you know any young lawyers who need experience" & he said There aren't any that young! If I were a bail-bondsman ñ the worst thing an inmate could send me as an inducement, would be that stone-faced, lantern-jawed Ella Raines! And even his name I bet, is phony. You can bank of it. 3 minutes to zero." [In Jean Peters' hand] Jean Peters was married to Howard Hughes between the years 1957-1971 and it has been reported according to columnist Jack Anderson, that Peters was "the only woman [Hughes] ever loved." HBS 68024. $3,000 (Inventory #: 68024)
$3,000.00 add to cart Available from
Heritage Book Shop
Share this item