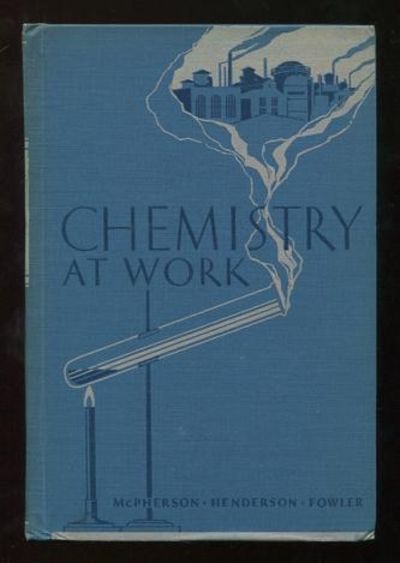 by McPherson, William, William Edwards Henderson, and George Winegar Fowler
Boston/New York/etc.: Ginn and Company. Very Good+. (c.1938). First Edition. Hardcover. (no dust jacket, probably as issued) [sound, clean book, very slight bumping to bottom corners, slight fading to spine cloth; no internal markings whatsoever]. (B&W illustrations, color plates) The very model of a modern high school chemistry textbook, and quite likely one of the few surviving copies of this particular work that doesn't appear to have ever been used by a student. From the Preface: "To [the authors'] mind the requirements of a good text in any science are these: The text should leave a lasting impression that a science is the outgrowth of observation, experiment, formulation of laws, and proper use of theories; that it is a continuously growing body of knowledge; that in any given field and at any given time it gives us our best understanding of the natural world of matter and energy." (Amen, brothers -- let's hear it for a fact-based world, that some of us still prefer to live in.) The lead author, William McPherson (1864-1951), certainly knew his stuff, and I don't think it would be much of a stretch to call him "Ohio's Greatest Chemist." He was born in the state (Xenia), took all his degrees at Ohio State University, joined the faculty there in 1892, was the dean of the graduate school from 1911 to 1937, and for a couple of years in the late 1930s was even acting (interim) president of the whole damn university; he died in Columbus, and the primary chemistry laboratory building on the OSU campus is named after him. How much more of a Buckeye could he possibly have been? (And co-author Fowler was esteemed enough in Syracuse, New York, that a high school there is named after him. I dunno about Henderson, though; the book itself tells us that he was also a chem prof at OSU, and given that Dr. McPherson's second wife's maiden name also happened to be Henderson, I suspect they might have been brothers-in-law. But I'll leave it to a better genealogist than I am to suss that out.) . (Inventory #: 23904)
$50.00 add to cart Available from ReadInk
Share this item
ReadInk
Offered by