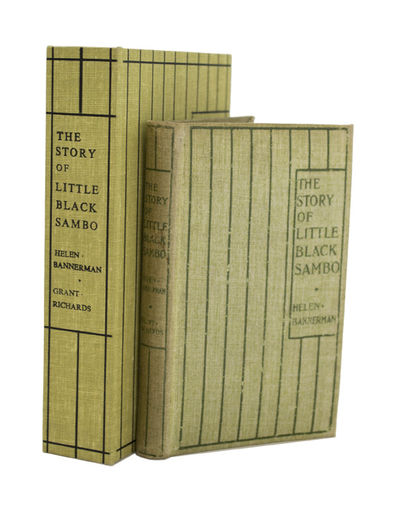 "Helen Bannerman (1862-1946) wrote this story during a long railway journey to India, after having left two small daughters to be educated in her native Scotland. The author never intended the book for publication, but through the encouragement of her children and friends the manuscript was shown to E.V. Lucas who agreed to publish it as the fourth title in his series of ‘The Dumpy Books for Children'" (Schiller, p. 381).

When first published in October 1899, The Story of Little Black Sambo was a "revolutionary-style picture book. Compared with its contemporary school of illustrators—Crane, Greenaway, and Caldecott—the pictures are simple yet bold. The format of the book encouraged its handling by young owners, and the pages alternated between text and illustrations in a manner very appealing and appropriate to its compact size. It even seems probable that Beatrix Potter's animal books, which began in 1901 with the privately printed Peter Rabbit, were at least influenced by the overall design of this book and, subsequently, so was the general success of the entire ‘Dumpy' series" (Schiller, pp. 381-382). Very few copies of the original printing have survived, and of the copies known, most have been badly worn because the small book was unable to withstand the constant handling of children. "Should a census eventually be attempted, there would probably be fewer copies located than of the notoriously rare and suppressed 1865 Alice" (Schiller, p. 386).