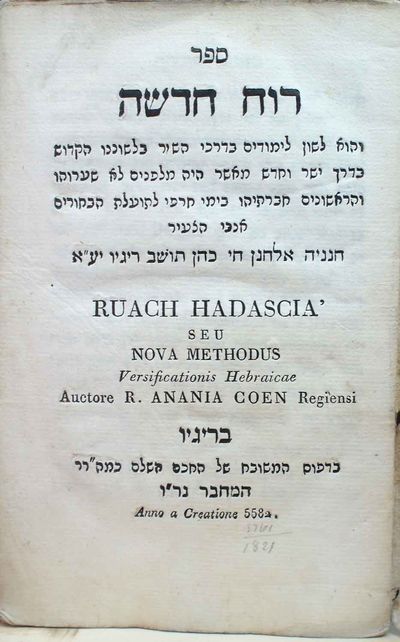 From modest origins, Anania Coen emerged as a principle Jewish intellectual who established a Hebrew school and a Hebrew press in his native Reggio Emilia. Later he became the rabbi of the Jewish community of Florence and established one of the first Hebrew printing presses there. His mature work is devoted primarily to issues of language, style, and rhetoric (as opposed to the vast body of Hebrew publishing devoted to religious and Talmudic arguments). He was extremely interested in developing a model for spoken Hebrew that would be based in the scriptural language but include neologisms, anticipating the spoken Hebrew of the Zionist movement.

As a lexicographer, he wrote a Hebrew-Italian dictionary (Ma'aneh ha-lashon, 1811-12), and a lexicon of Talmudic Hebrew with definitions in Hebrew and Italian (Sefer Safah ahat, 1822).

In addition to his Hebrew publications, Coen published several translations into Italian of British rationalists such as Pope and Hume, and some of the Romantic novels of Walter Scott!

In 1822, Coen published this essay on language and prosody. According to Giulio Busi's monograph on Coen, Ruah Hadasha "is perhaps the most significant document of Jewish poetic theory in Italy during the 18th and 19th centuries, ... offering a clear and original treatment of the intricate matter of Hebrew versification." Busi continues, "In effect, Ruah Hadasha is the synthesis of the long literary process that detached Italian Judaism from Medieval Judeo-Arabic models" (Anania Coen: editore e letterato ebreo tra sette e ottocento, Bologna, 1992, p. 27-28). The citations in the text include examples of modern Hebrew poetry (by Yeshua Hai Carmi, among others) alongside biblical and Talmudic selections. (Inventory #: 5952)
$600.00 add to cart Available from
Rare Book Studio
Share this item
Rodger Friedman Rare Book Studio
Offered by

Bulletin of the Atomic Scientists. Volumes 3-5

The Theory of Spectra and Atomic Constitution Three essays

Cambridge : Cambridge University Press , 1922
(click for more details about The Theory of Spectra and Atomic Constitution Three essays)
View all from this seller>