Illustrations of the Book of Job... ; Colour versions of William Blake's Book of Job designs from the circle of John Linnell. The Engravings and related material with Essays, Catalogue of States and printings, Commentary on the Plates and Documentary Record by David Bindman, Barbara Bryant, Robert Essick, Geoffrey Keynes and Bo Lindberg. 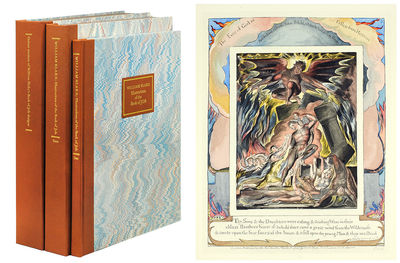 by Blake, William; Lindberg, Bo (Essayist); Bindman, David (Editor).
Folio. London: The William Blake Trust, 1987. Folio, two large slipcases, the first housing the text volume, and a portfolio of plates, including all 21 plates in several states, 21 fascicules, and the plate-by-plate commentary; the second slipcase houses The Colour Versions of the Book of Job..., the text volume, and three separate volumes of illustrations, all bound in quarter-morocco with marbled paper covered boards, with solander boxes fitted inside each slipcase, printed on Arches pure rag paper. Near fine overall. § Limited edition, number III of LXV numbered copies, from a total edition of 387. Illustrations of the Book of Job with essays and commentary from several notable Blake scholars including Charles Ryskamp, David Bindman, John Commander, Geoffrey Keynes, Robert Essick, Bo Lindberg, and Barbara Bryant. The plates are comprised of 22 fascicules including the title-page and 21 plates of Blake's engraved Illustrations of the Book of Job in facsimile of the proof copy lately in the collection of Sir Geoffrey Keynes. Each fascicule also contains reproductions of related material together with a plate-by-plate commentary by Bo Lindberg. Colour versions of WIlliam Blake's Book of Job designs... with three portfolios containing "The New Zealand Set" of 21 plates and a title-page, "The Collins Set of Coloured Engravings" of 21 plates and a title-page, and "Four Coloured Engravings" of plates 11, 15, 18 and 20 from The Fitzwilliam Museum, Cambridge. Plates printed by pochoir method at the Trianon Press, Paris, under the supervision of the late Arnold Fawcus.A surprisingly hard title to find from the Blake Trust, being their last publication until the 2009 issue of “The Grave” watercolors. The edition included a less expensive version of this issue, as well as two more elaborate issues. The analysis of the various states of the Job plates, and of the coloring of the three colored copies known, is not printed anywhere else and thus this set is essential for anyone studying this book, surely Blake’s masterpiece of engraving. (Inventory #: 110738)
$4,950.00 add to cart or Buy Direct from
John Windle Bookseller
Share this item

John Bull's Other Island and Major Barbara: also How He Lied to Her Husband.

London : Constable , 1907
(click for more details about John Bull's Other Island and Major Barbara: also How He Lied to Her Husband.)

Dublin : Cuala Press , 1941
(click for more details about Letters to Florence Farr. Edited By Clifford Bax.)
View all from this seller>