Memorial Services in the Congress of the United States and Tributes in Eulogy of Robert Francis Kennedy: Late a Senator from the State of New York 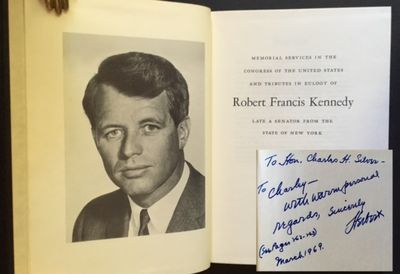 Washington, D.C.: Government Printing Office, 1968. Hardcover. Near Fine. A nice Association copy: WARMLY INSCRIBED BY NEW YORK CONGRESSMAN HERBERT TENZER (1905-1993) TO CHARLES H. SILVER, FORMER PRESIDENT OF THE NEW YORK CITY BOARD OF EDUCATION AND PRESIDENT OF BETH ISRAEL MEDICAL CENTER. Tenzer's tribute to Charles Silver's patriotism is recorded in his tribute to RFK, which here appears on pgs. 262-263. The tribute book itself has help up nicely. Clean, tight and Near Fine in its somber, dark boards, with crisp gilt-titling along the front panel and spine Quarto, published by the Government Printing Office. "A compilation of services and tributes as given in the United States Senate and House of Representatives on the life, character and public service of the late Senator Robert Francis Kennedy" (Inventory #: 15329)
$200.00 add to cart or Buy Direct from Appledore Books
Share this item
Appledore Books
Offered by