An American GI Fighting In The Philippines Writes About The Conflict: “We’ve Had Casualties, But One Has To Expect Some Especially When Fighting An Offensive War - The Japs Being Dug In So Well It Was Almost A Superhumanjob To Clear Out Them” 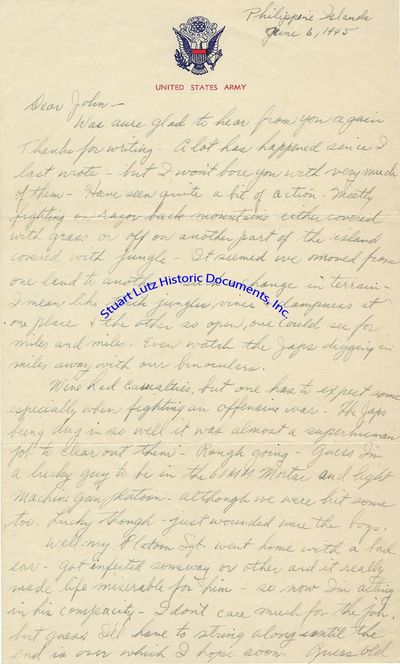 signed
by (WORLD WAR II IN THE PHILIPPINES)
(WORLD WAR II IN THE PHILIPPINES). ALS. 3pg. 6” x 10 ½”. June 6, 1945. Philippine Islands. An autograph letter signed “Claude”, an American GI stationed in the Philippines. He wrote on “United States Army” stationery to his friend John about fighting the Japanese: “Dear John, Was sure glad to hear from you again Thanks for writing. A lot has happened since I last wrote - but I won't bore you with very much of them - Have seen quite a bit of action. Mostly fighting n razor back mountains either covered with grass or off on another part of the island covered with jungle - It seemed we moved from one land to another - such a change in terrain - I mean like thick jungles vines & dampness at one place, & the other so open, one could see for miles and miles - even watch the japs digging in miles away with our binoculars. We’ve had casualties, but one has to expect some especially when fighting an offensive war - The japs being dug in so well it was almost a superhumanjob to clear out them - Rough going - guess I'm a lucky guy to be in the 60MM Mortar and light Machine Gun platoon - although we were hit some too. Lucky though just wounded were the boys. Well my Platoon Sgt. Went home with a bad ear - got infected someway or other and it really made life miserable for him - so now I'm acting in his compacity - I don't care much for the job but guess I'll have to string along until the end is over which I hope soon. Guess old Nick here was lucky - Had a few close one's too close for comfort. just hope my luck holds on. Guess as far as the point system goes - I'll be in the Army quite awhile yet. Only can figure out 69 points - Quite a jump to dig up 16 more And I've been in this Army 38 months already - Seems like half my life - When I get home I won't know how to act like a civilian - ha - I know one thing I'll have to learn to control my Army slang or else -??? I'm writing this in our rest area - although we aren't resting as yet - A lot of hard work to build it up & get it in shape first - Haven’t been her long - but it's a nice area - About like Fort Lewis. Pine trees - cold at night (need three blankets) still my pups get cold) and now that the rainy season has set in it reminds me of Fort Lewis more so, as we had so much rain there. Have one camp on a golf course - Been quite some time since I played golf - last tie in the Hawaiian Is. on the isle of Moloka! - More or less pasture. I'd send you a v-mail, but as far as I know yet, they go straight home with out being photographed and I don't think you'd want that kind. So am using the borderless airmail variety - No two cent overprints have showed up in this area as but if they do I'll remember you - Some of my other friends were asking about them, too. Mr. Weltack has been sending me a first day cover now and then and I really appreciate it - as I have no way or time to bother with them. Hope I can continue after the war as I really get a kick out of FD. 's F.Fs F.AM's & all the other better covers. I belonged to the AAMS at one time and have been thinking about joining the MACC in the future. Its been a long time since I saw a good game of baseball- Was in 1939 I guess - In Chicago at the Cub park - The Cubs were playing the Giants at the time. My dad & cousin are great Cub fans but me I like to see a good game - The best men win - I used to play a little, too. You know how young guys are - getting up a team & trying to lick the neighboring town teams a log of good clean fun. Well John write when you have time. I enjoy hearing from you. Best of Wishes Sincerely, Claude”. The letter is in fine condition. (Inventory #: 4410)
$100.00 add to cart Available from
Stuart Lutz, Historic Documents, Inc.
Share this item