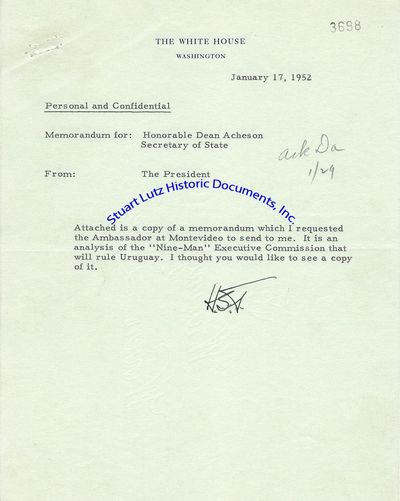 signed
by HARRY TRUMAN
HARRY TRUMAN (1884-1972). Truman was the Thirty-Third President. TLS. 1pg. 7” x 9”. January 17, 1952. The White House, Washington. A typed letter signed “H.S.T.” by Harry Truman as President on “The White House” stationery. Truman forwarded a confidential memorandum about Uruguay to Secretary of State Dean Acheson. “Attached is a copy of a memorandum which I requested the Ambassador at Montevideo to send to me. It is an analysis of the ‘Nine-Man’ Executive Commission that will rule Uruguay. I thought you would like to see a copy of it. H.S.T.” There are staple holes in the upper left corner. The five-page, typed memorandum is included. It details the new, nine-member “Collegiate” council that abolished the Presidency and began to rule Uruguay on March 1, 1952. It is a very thorough report that covers a brief history of democracy in Uruguay, the organization of the new system, the leanings of probable council members, the lack of public support for the new system, and its potential effects on Uruguay-United States relations. Early-20th century Uruguayan President José Batlle y Ordóñez (1856-1929) and Argentinean dictator Juan Perón (1895-1974) are mentioned. Both the letter and the memorandum are in very good condition. (Inventory #: 4422)
$750.00 add to cart Available from
Stuart Lutz, Historic Documents, Inc.
Share this item