THE ATHENAID. A POEM. THREE VOLUMES. VOL. I II & III 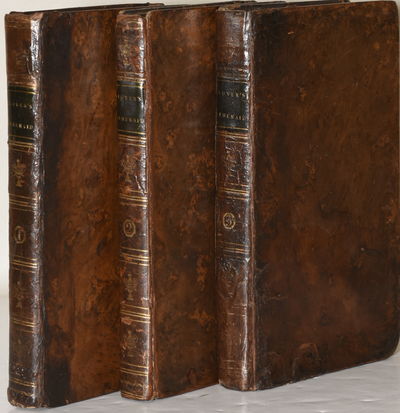 by The Author of Leonidas [Richard Glover]
London: Printed for T. Cadell, 1787. First Edition. Full Leather. Very Good binding. First Edition of Glover's epic poem, The Athenaid, in thirty books. Complete in three volumes. Known for his successful epic, Leonidas, this work was posthumously published by his daughter, Mrs. Halsey. It was thrashed by the DNB, which says: "His ponderous 'Athenaid,'... is much longer and so far worse that 'Leonidas,' but no one has been able to read either for a century." (DNB VIII, 7) -- reason enough for the curious to give it a shot. Portrait frontispiece. With some repair and patching to the spines. Some dampstaining and toning. Foxing to preliminaries. Mottled calf binding with black leather label, devices, and rules in gilt. (DNB VIII, 6-7. ESTC T96995.). Very Good binding. (Inventory #: 283947)
$300.00 add to cart or Buy Direct from
Black Swan Books
Share this item

Philadelphia : Carey & Lea , 1831
(click for more details about [EUROPEAN HISTORY] [MILITARY] NARRATIVE OF THE WAR IN GERMANY AND FRANCE IN 1813 AND 1814)
View all from this seller>