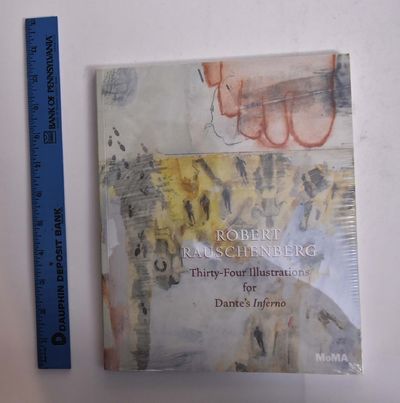 by Dickerman, Leah, Robin Coste Lewis, and Kevin Young
New York: The Museum of Modern Art, 2017. Paperback. New in shrinkwrap.. Color-illustrated wraps with brown and white lettering. 104 pp. Mainly color illustrations. Robert Rauschenberg worked in a wide range of mediums including painting, sculpture, prints, photography, and performance, over the span of six decades. He emerged on the American art scene at the time that Abstract Expressionism was dominant, and through the course of his practice he challenged the gestural abstract painting and the model of the heroic, self-expressive artist championed by that movement. Photography and printmaking were two of Rauschenberg's abiding interests. In the 1958?60 series based on the thirty-four Cantos of Dante's 'Inferno' (346.1963.1-34), he used a solvent to transfer photographs from contemporary magazines and newspapers onto drawing paper. The series is emblematic of a lifetime of experimentation with the ways the deluge of images in modern media culture could be transmitted and transformed. -FirstSearch. (Inventory #: 166322)
$30.00 add to cart or Buy Direct from Mullen Books
Share this item