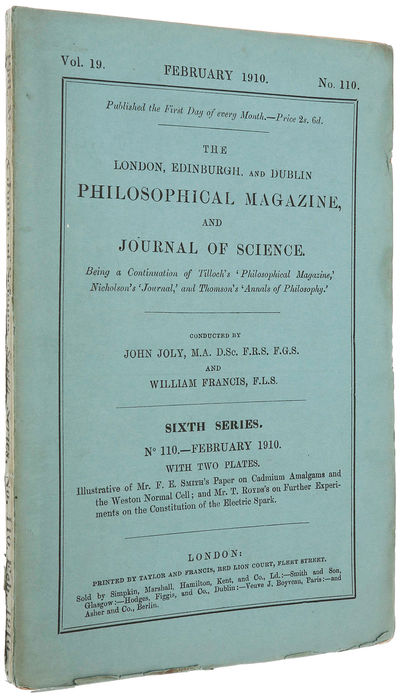 by MILLIKAN, ROBERT ANDREWS
London: Taylor & Francis, 1910. First edition. original wrappers. Very Good. FIRST EDITION IN ORIGINAL WRAPPERS of the account of Millikan's famous experiment, later known as the 'oil-drop experiment', in which he first provided the definitive proof that all electrical charges are exact multiples of a definite, fundamental value-the charge of the electron. Millikan's experiment is nowadays known as the 'oil-drop experiment' due to a later improvement by Millikan and his student Harvey Fletcher in 1910 - using oil in the cloud chamber - but it was in this paper (although water and alcohol were the liquids used) that Millikan first made precise measurements of the charge on single isolated droplets instead of as earlier just statistical averages on the surface of clouds of droplets. Although important, the fundamental breakthrough in Millikan's work was not his measurement of the actual value of the electron's charge (in fact he was as close to the correct value in this paper dated October 1909 as he was in the later oil experiment of 1910), but the fact that Millikan was able to produce, isolate, and observe single droplets with electrical charges, and show that repeated measurements of the charges always revealed exact integral multiples of one fundamental unity value. Previous experiments by Thomson and Wilson had in fact revealed the same value of the electron's charge as Millikan's experiment did but their determinations were based on statistical averages on the surface of large clouds of numerous water droplets and repeated measurements on the clouds gave fractional values of the electron's charge. This fact implied to some antiatomistic Continental physicists that it was not the constant of a unique particle but a statistical average of diverse electrical energies. However, in this 1909 experiment Millikan showed that his single droplets could not hold a fractional charge but always had a charge that was an exact integral multiple of an electron's charge (e.g., 2e, 3e, 4e, …). In 1910 Millikan and Fletcher improved and simplified the whole experiment by using oil, mercury, and glycerin as liquids instead of water; they could now observe the droplets for several hours instead of just under one minute and also neglect having to compensate for the evaporation of the water and alcohol droplets. And thus the experiment became known as the 'oil-drop experiment', but the crucial breakthrough had already taken place in this 1909 experiment. In this paper Millikan emphasized that the very nature of his data refuted conclusively the minority of scientists who still held that electrons (and perhaps atoms too) were not necessarily fundamental, discrete particles. And he provided a value for the electronic charge which, when inserted in Niels Bohr's theoretical formula for the hydrogen spectrum, accurately gave the Rydberg constant-the first and most convincing proof of Bohr's quantum theory of the atom. In 1923 Millikan became the first American-born Nobel laureate for this work together with his1916 determination of Planck's constant on the basis of Einstein's theory of the photoelectric effect.   Contained in: The Philosophical Magazine for February 1910, vol 19, no. 110, pp. 209-228. Octavo, original wrappers. London: Taylor & Francis, 1910. The entire issue offered here, uncut and unopened in the original blue printed wrappers (spine strip with some very good restoration, hardly noticable). Rare in wrappers in such good condition. (Inventory #: 2107)
$4,500.00 add to cart or Buy Direct from
Manhattan Rare Book Company
Share this item

Boston : Edes and Gill , 1761
(click for more details about Relation of a Voyage from Boston to Newfoundland, for the Observation of the Transit of Venus, June 6, 1761. WITH: Two Lectures on the Parallax and Distance of the Sun, as Deducible from The Transit of Venus)

Hollinwood/Lancs : Ferranti, Ltd , 1951
(click for more details about Faster than Thought. The Ferranti Nimrod Digital Computer)
View all from this seller>