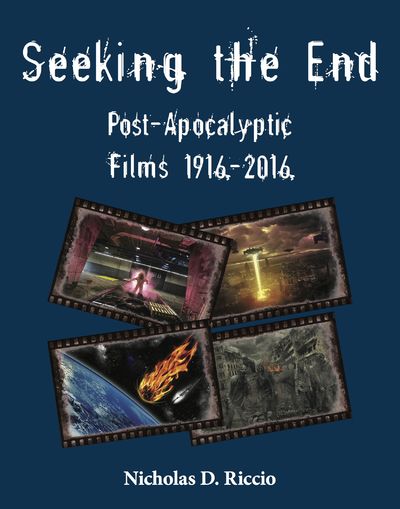 by Riccio, Nicholas D.
8vo, paperback, glossy covers,157pp. Near fine condition. One of the most significant trends to emerge in popular culture in recent years has been the growing fascination with post-apocalyptic films. From films like Armageddonto World War Z, we have become preoccupied with the end of the world. The explosion of the output of these films over the past twenty years has been incredible. You cannot even turn on your TV without being chased by zombies, rogue meteors, or some kind of deadly virus. While the growing popularity of these films shouldn't be a surprise to anybody, the roots of this trend go far deeper and longer than most people realize. This post-apocalyptic film journey has actually gone on for more than 100 years. In Seeking the End: Post-Apocalyptic Films 1916-2016. Part of the discussion includes coverage of the very first film of this genre, a silent Danish film called The End of the World(Verdens Undergang). More recent films that are part of this journey are Cell, These Final Hours andThe Road.A summary and analysis is included for each film, and I have a rating system from one to five Exploding Worlds for each movie. Over 110 films are discussed. While most of the major films in this category are, of course, discussed, so are many others that are rather rare and obscure. Copies are signed! (Inventory #: 106487)
$13.95 add to cart Available from
Nicholas D. Riccio, Rare Books
Share this item
Nicholas D. Riccio Rare Books & Prints
Offered by