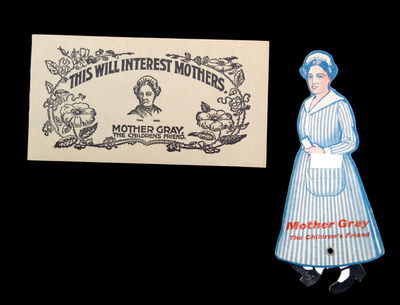 Chicago: J. B. Carroll Co , c1900. Minor toning due to age.. Two pieces of advertising materials for Mother Gray's Sweet Powders for Children. The first item is a 16 pp (including covers) booklet advertising Mother Gray's Sweet Powders for Children, as well as other products sold by the manufacturer, including Mother Gray's Aromatic Leaf (a medicinal tea for digestive health) and Allen's Foot Ease (a powder to help with achy feet). The Sweet Powders was supposedly an all-natural remedy developed by a nurse, known as Mother Gray, who worked at the Children’s Home in New York City. While the powders were originally meant to treat pinworms, they were also soon used to treat a variety of other ailments, such as headaches, fever, and constipation. While it is unknown if there is any truth to who Mother Gray was, the product itself was distributed and marketed by Allen S. Olmstead who owned a proprietary medicine company. The powders weren’t exactly made from ‘all-natural’ ingredients, the main ingredient was actually calomel (mercurous chloride), which could be toxic if used regularly, causing mercury poisoning. Other ingredients were licorice, slippery elm, anise, sulfur, bicarbonate of soda, sugar (hence the word sweet in the name) and mandrake (also poisonous). The second item is a paper doll of Mother Gray, who supposedly was a nurse, specializing in children's health. The "walking" paper doll has feet on the bottom that rotate as you push it across a table. The pocket of the dress has an insert so that you can have something sticking out of the pocket. The back states that the doll was made by J. B. Carroll Co. Measures 5 3/4" x3" (booklet), 6" x 2 1/2" (paper doll) (Inventory #: 28001105)
$110.00 add to cart or Buy Direct from Eclectibles
Share this item