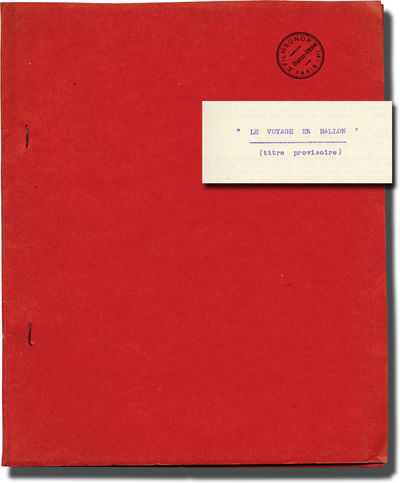 by Albert Lamorisse (director, screenwriter, producer); Andre Gille, Maurice Baquet, Pascal Lamorisse, Jack Lemon, Ole Neumann (starring)
France: Filmsonor, 1958. Draft script and synopsis for the 1960 film, here under the original French title. From the collection of Christian de la Maziere, with his name in holograph ink on the title page of the script. Also included is a small press kit packet detailing cast and crew credits, and a small press relations packet, dated 1958, detailing a travel itinerary for cast and crew. Brief annotations in holograph ink on the press travel itinerary. Housed in a large manila envelope with the French title on the flaps in holograph ink.

Director Lamorisse starred his own son, Pascal, as a boy who stows away on his grandfather's (Gille) hot-air balloon that is less controllable than suspected. They narrowly escape church spires, and snag clotheslines and party guests, Pascal enjoying every minute. Lemmon narrated the English version, and subsequently bought the rights to the film. Winner of an OCIC Award at the 1960 Venice Film Festival.

Christian de la Maziere (1922-2006) was a journalist and member of the Charlemagne Division of the Waffen SS, and was featured in Marcel Ophuls 1969 documentary "The Sorrow and the Pity," discussing his role in WWII. He also worked for the fascist newspaper "Le Pays Libre" before joining Charlemagne, and in 1974 he wrote "The Captive Dreamer." His involvement at Vichy and the Waffen SS was pardoned before his career in press and film relations, and he apparently garnered some postwar celebrity.