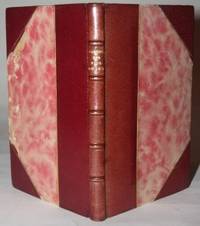 by Une Société de Gens comme Il Faut
London, 1875. Limited Edition. Half Morocco, marbled boards. Very Good. Scarce, with no copies located on OCLC First Search, not in the BNF, etc. as might be expected from a 19th century "Baedeker" of Brussels' houses of ill-repute. Supposedly an 1875 reprint of an 1830 pamphlet from Anvers (Antwerp), we would stress we could find no other copies of either! No. 68 of 100 limitation. 12mo. 16.5 by 11 cm. 40 pp. From the pamphlet one can infer that to the clientele (or those who would turn to such a pamphlet), copulation was just a small part of the bordello experience, for here we learn about the decor, the atmosphere, the pretensions, even the sometimes theatrical resume, of the prostitutes. Indeed, there would seem to be some affinity between the experience these johns sought and Japanese men who patronized Geishas. As to why there would have been a reprint of such a guide 45 years later and when its information would have been wildly out-of-date or obsolete, we would surmise that there was a frisson of naughty titillation, and a sort of celebration of erstwhile debauchery. Perhaps the singularity of the pamphlet from that earlier era heightened its interest. And one can imagine the nostalgia of now elderly men who might have visited some of these establishments back in their "salad days". Condition: several small chips to marbled paper pastedown of cover. Scattered light foxing. (Inventory #: 006120)
$1,000.00 add to cart Available from
White Fox Rare Books & Antiques
Share this item
White Fox Rare Books and Antiques
Offered by