Mjesto i uloga derviskih redova u Bosni i Hercegovini [The Place and Role of Dervish Orders in Bosnia-Herzegovina]; On the Occasion of the Year of Jalaluddin Rumi - 800 Years Since His Birth 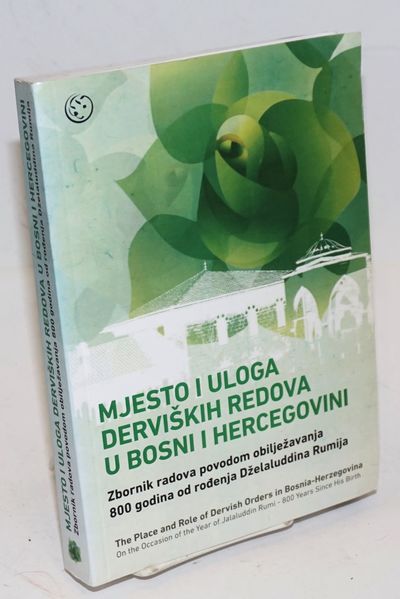 by Hafizovic, Resid (ed.)
Sarajevo: Orijentalni Institut, 2011. Paperback. 567p., trade paperback, top right corner of cover and immediately following pages is bumped, else very good. Text is largely in Bosnian with English summaries. Only 8 found worldwide in OCLC as of June 2018. Sizeable collection of the proceedings from a scholarly conference held in Sarajevo in 2007 commemorating the UNESCO designated "Year of Rumi". Rumi was a Persian-Turkish Sufi mystic and poet, best known as founder of the "whirling dervishes", and spiritual source of the Mevlevi Order. Four of the papers collected are in English, including one by Stephen Schwartz on "The Last Jewish Sufi: the Life and Writings of Rabbi Ariel Bension (Inventory #: 226084)
$75.00 add to cart or Buy Direct from Bolerium Books
Share this item