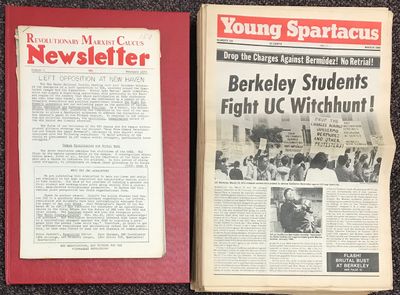 by Spartacist Youth League
New York: Spartacus Youth League, 1986. Complete run of the 134 issues published of the newsletter/newspaper in its three incarnations. These begin with the Revolutionary Marxist Caucus newsletter (nos. 1-8; 1-6 present here as loose issues, no. 6 rather worn with cover detached but present; numbers 7 and 8 are bound together with the subsequent incarnation of the serial, the Revolutionary Communist Youth newsletter numbers 9 to 18, followed by numbers 19-38 of Young Spartacus. Issues from 39 onward are present as separate newspapers. The publication continued under this title until its final issue, number 134 (March 1986). Pages are toned, and loose issues after 38 have a horizontal fold crease. (Inventory #: 225954)
$400.00 add to cart or Buy Direct from Bolerium Books
Share this item