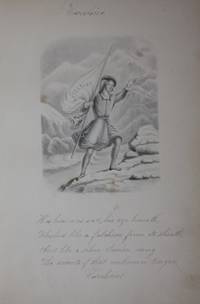 Full Morocco
by Longfellow, Henry Wadsworth.
Full Morocco. Very Good. A beautiful manuscript rendition of Longfellow's early Alpine poem, written in a calligraphic hand and with original artwork on every page. N.d., circa 1850. 8vo. 21 by 14 cm. Unpaginated. Ten leaves, with writing and illustrations solely on rectos. We do not know who created this album, although there is a note in the front alluding to Arthur Armstrong (1798-1851), who was a well-known artist and art teacher based in Philadelphia. We think the artwork, done with pen and ink and wash, is original. We note there is considerable similarity of one of the illustrations to one that was in a published collection of Longfellow's works from the 1840s, but there are marked differences in the detailing of the two, and we have discerned as much similarity between that published illustration and those published elsewhere. Thus we would say this manuscript's artist might have been influenced by the published work but consciously departed from it as well. Condition: moderate to heavy wear to the 19th century binding. The leaves within are age toned and a bit brittle. Tissue guards have some tears. (Inventory #: 006053)
$1,500.00 add to cart Available from
White Fox Rare Books & Antiques
Share this item
White Fox Rare Books and Antiques
Offered by