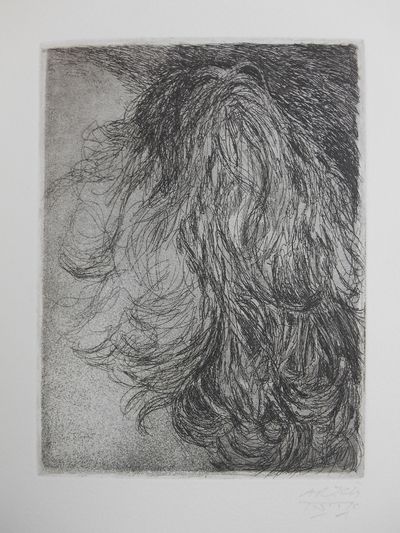 by Beckett, Samuel; Arikha, Avigdor (Artist)
Cambridge: Rampant Lions Press for The Enitharmon Press, 1972. Limited First Edition. Folio. Fine. Arikha, Avigdor. Number XIII of XV copies, folio size, [24] pp., with an extra suite of three etchings, all of which are signed by the artist, signed by Samuel Beckett on the limitation page. "The North" is a paragraph extracted from the short prose work "The Lost Ones" originally published as "Le Depeupleur" Paris: Les Editions de Minuit, 1971, by Samuel Beckett (1906-1989). The story has no plot, but is rather a metaphorical exploration of the landscape of the unconscious mind, evoked through the image of a flattened cylinder and its crowded inhabitants.

Avigdor Arikha (1929-2010) was a close friend of Samuel Beckett, who he met in Paris, where he settled after escaping a Nazi concentration camp. He is regarded among Israel's greatest postwar artists, and was named a Chevalier de la Légion d'honneur in 2005. His images of "the woman vanquished" are chillingly somber, and darkly chaotic. A remarkable collaboration between two great artists of the twentieth-century. This is from a special edition of 15 copies which were produced primarily for the publisher Alan Clodd. These were not issued in a slipcase.

____DESCRIPTION: Original white paper portfolio with enclosing lower flap, title in blind to the upper cover, loose folios as issued, three signed etchings with tissue guards, together with an extra suite of those same etchings from the text, signed, hand-set Palatino type, printed by Will and Sebastian Carter at the Rampant Lions Press on J. Barcham Green paper, 15" by 11 5/8", [24] pp., limited first edition, number XIII of XV copies, signed by the author and the artist.

___CONDITION: A fine copy, internally bright and complete, covers are clean and bright, internally free of prior owner markings; crisp and as new, a heartbreakingly lovely work.

___POSTAGE: International customers, please note that additional postage may apply as the standard does not always cover costs; please contact us for details.

___Swan's Fine Books is pleased to be a member of the ABAA, ILAB and IOBA and we stand behind every book we sell. Please contact us with any questions you may have, we are here to help. (Inventory #: CNJL566)
$3,850.00 add to cart or Buy Direct from
Swan's Fine Books
Share this item

The Hearthstone; or, Life at Home. A Household Manual...Together With A Complete Cookery Book

Beloit, Wis : The Inter-State Publishing House , 1884
(click for more details about The Hearthstone; or, Life at Home. A Household Manual...Together With A Complete Cookery Book)

[Boston Massacre] The Annual Register,; or a View of the History, Politics, and Literature, For the Year 1770

London : J. Dodsley , 1771
(click for more details about [Boston Massacre] The Annual Register,; or a View of the History, Politics, and Literature, For the Year 1770)
View all from this seller>