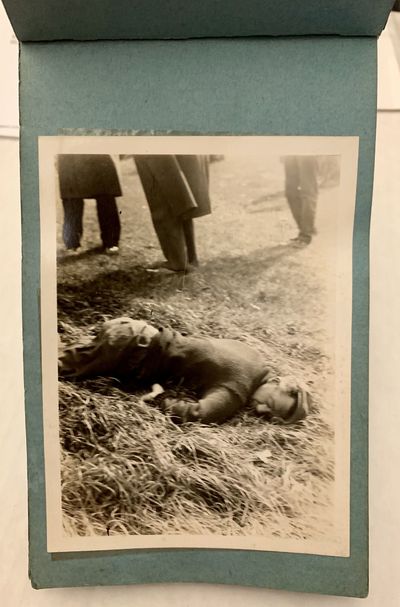 by Deshates, Walter [officer]
Turner, ME: Self-published, 1937. Unique. Original Wraps. Very Good. Unique. Original Wraps. "West shore of Pleasant Pond, Turner, Maine / October 2nd, 1937 / Pictures by Walter A. Deshates, Deputy Sherrif" [from front wrapper]. 20 b/w photographs of the body and surroundings from a rural Maine murder scene.
"Turner, Me, Nov. 1 [1937] - Mystery surrounds the death of Walter Richmond, 45, whose body was found in the yard of his home on the Merrill Mills road Saturday and Dr. Henry S. Prince of Lewiston, country medical examiner, called into the case, ordered an autopsy to determine the cause of death.
He said Richmond had been dead several days and his water-soaked clothes supported that theory. Strewn about the yard were articles from Richmond's pockets, jacknives, coins, glasses case, cartridges, matches, a bottle opener, etc.
The body was discovered by Walter Mathews or Turner and John H and Charles Comeau of Sumner, lumbering on a lot in the rear of Richmond's home, who passed over a road through the Richmond yard, but they went over this road earlier in the day and several times the last few days, passing within a few feet of where the body was found without noticing it. Richmond was last seen Tuesday night when he bought groceries at a Turner Center store and obtained a suit of clothes by a neighbor a mile away. The groceries were missing Saturday.
Richmond was the son of Mr. and Mrs. Elisha Richmond, was born and always lived on the place where he was found dead today and had lived alone since the death of his wife eight years ago." [Portsmouth Herald, Portsmouth, NH]. Minor shelf/edge wear, light soiling and spotting at front wrapper, pen notation at front ("No - 100"), else tight, bright, and unmarred. Green cardstock, black tape binding, photographs tipped in. 12mo. np. Illus. (b/w plates). (Inventory #: 9626)
$450.00 add to cart or Buy Direct from
Lux Mentis, Booksellers
Share this item
Lux Mentis, Booksellers
Offered by

Practical Occultism: From the Private Letters of William Q. Judge

London, UK : Aeon Books Ltd , 2004
(click for more details about The Shadow Tarot)
View all from this seller>