The Vampyre; A Tale 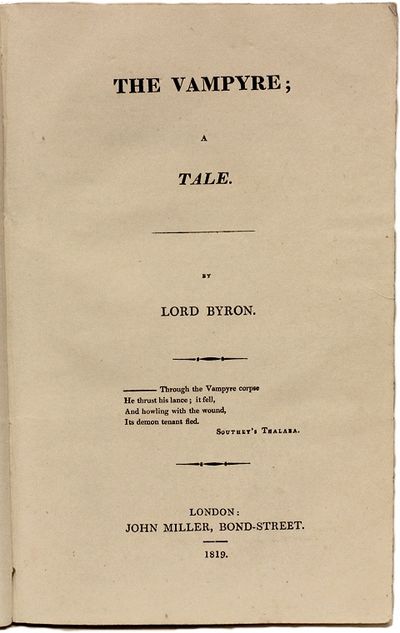 by POLIDORI, John William (Lord Byron)
London: John Miller, 1819, 1819. THE EXCEEDINGLY RARE PIRATED PRINTING WITH BYRON'S NAME ON THE TITLE PAGE. 1 vol., 20.8mm x 13.8mm, 46pp., with the half-title, complete, extracted, internally clean and bright. Housed in a cloth clamshell box, gilt lettered black morocco spine label. OCLC locates only 8 copies in institutions. Seven in the U.S. and one in the UK. Polidori's famous story was first published in the ''New Monthly Magazine'' for April 1, 1819, shamelessly ascribed to Lord Byron, as was the first issue of the separate printing. In the May edition of New Monthly, much to the readers' surprise, a letter by Dr. John Polidori (Lord Byron's physician) was published. He acknowledged the fact that the tale was based loosely upon a story which Byron had begun and summarily abandoned, and Polidori insisted that The Vampyre was his own work. "As the contents of the New Monthly Magazine were not copyrighted in 1819, anyone was free to publish the contents without permission of the owner. John Miller of London took advantage of this lack of protection by printing an edition of "The Vampyre" independent of Henry Colburn or Sherwood, Neely, and Jones. As it was printed by J. Johnson from the magazine article, it carried the author line: "By Lord Byron." The text only was reset, omitting all the preliminaries and the appendix found in all other editions printed in London the same year." - The Papers of the Bibliographical Society of America , Vol. 63, No. 2 (Second Quarter, 1969), pp. 83-100 (Inventory #: 000556)
$9,750.00 add to cart Available from D & D Galleries
Share this item
D & D Galleries
Offered by

Most books shipped within 24 hours or next business day. 5 day return policy.
More from this seller

The Mysteries of Udolpho, A Romance; Interspersed With Some Pieces Of Poetry

London: for G. G. and J. Robinson, 1794 , 1794
(click for more details about The Mysteries of Udolpho, A Romance; Interspersed With Some Pieces Of Poetry)
View all from this seller>