Fashion and Folly: or the Buck's Pilgrimage 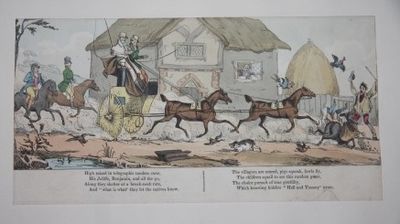 by Heath, William.
London: William Sams, 1822. First edition. Full Calf. Very Good. Oblong, 26.5 by 40.5 cm. 25 hand-colored plates. Scarce -- copies held by four institutions only noted on OCLC (Harvard, Duke, Art Institute of Chicago, Stanford). Each plate, excepting the first one, accompanied by eight lines of verse. The Buck in question is a young dandy or fop named Dashall Lubin, a baronet from the country. He is shown driving a carriage recklessly, gaming, clubbing, at a ball, at a masquerade, at the theatre, at a coffee house, brawling on the street, at court, etc. Thus is this collection of plates loosely forms a narrative -- one that satirizes the spoiled young nabobs of the day. Condition: hinges repaired. Some abrading to the calf. Original spine laid on. (Inventory #: 006112)
$7,500.00 add to cart Available from
White Fox Rare Books & Antiques
Share this item
White Fox Rare Books and Antiques
Offered by