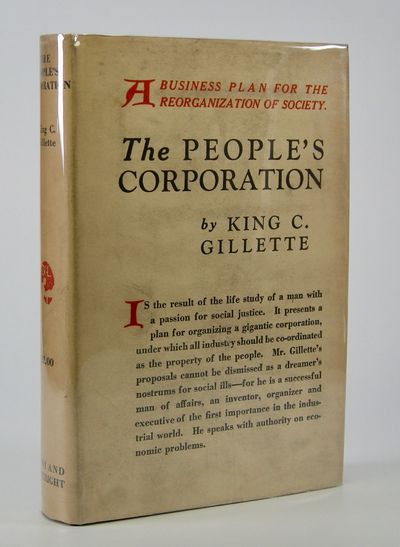 by Gillette, King C. (Sinclair, Upton)
New York: Boni and Liveright, 1924. First edition. Fine and bright in a moderately soiled dust jacket; an excellent copy.. 8vo, 237pp; blue cloth stamped in gilt. The successful entrepreneur, an inventor of the safety razor who made a fortune selling disposable razor-blades, was also a utopian socialist with radical notions for the transformation of society. In this book, written in silent collaboration with Upton Sinclair, he developed an idea he began to articulate in his 1894 book The Human Drift, that all industry be centralized under a single corporation belonging to and for the benefit of, all the people. Gillette attempted to bring his vision to reality, even once offering the presidency of the corporation to former President Theodore Roosevelt (who was not interested). Laid into this copy is a separately printed leaflet announcing: "Write your own review of the People's Corporation" and offering $1000 in prizes. The reviews were to be judged by a panel comprised of "Norman Hapgood, author and publicist; Herbert Croly, editor of The New Republic; and Prof. Edwin R.A. Seligman, Professor of Political Science at Columbia University. Very scarce, especially in such fine condition. (Inventory #: 205234)
$500.00 add to cart or Buy Direct from
Locus Solus Rare Books
Share this item
Locus Solus Rare Books
Offered by

30 day return guarantee, with full refund including original shipping costs for up to 30 days after delivery if an item arrives misdescribed or damaged. We are required by law to collect California State Sales Tax for all orders within California unless tax exempt
More from this seller

The Works of Thomas Chatterton.; Containing His Life, by G. Gregory, D.D. and Miscellaneous Poems

London : Printed by Biggs and Cottle, for T.N. Longman and O. Rees , 1803
(click for more details about The Works of Thomas Chatterton.; Containing His Life, by G. Gregory, D.D. and Miscellaneous Poems)