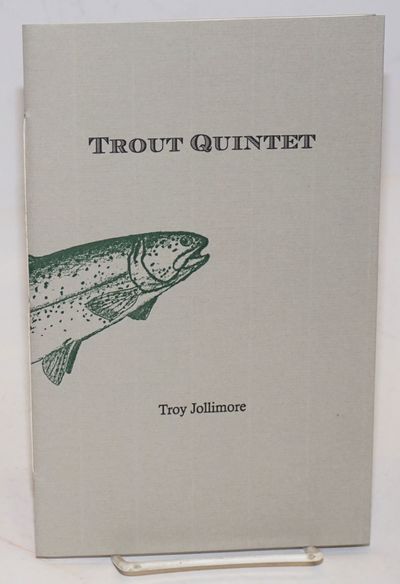 by Jollimore, Troy
Richmond CA [?]: Hit & Run Press, 2015. Pamphlet. 5p., letterpress on veddy nice paper with a colophon that explains everything. Pamphlet in 9x6 inch sewn wraps, no.38 of a run of only 74 copies. Quite a pretty booklet in as-new shape, no damage or ownership stuff. Item in hand is a sort of Berryman-esque dreamsong; the poet celebrates a mighty man (he can catch trout with his bare hands) with a few flaws (sometimes flubs a catch); the mighty guy is a Paul Bunyanesque feller associated with Canada (poet b.Canada, now relocated, teaches philosophy). First published in 2000 in the journal Ploughshares, this evidently the first separate or "book" issue. From an interview given after a later book ("Tom Thompson in Purgatory") won big in poetryland: 'I first put a character named Tom Thompson in a poem called "Trout Quintet." There, he was a semi-mythical figure.. the character is very different' [from the Tom of "Purgatory"]. (Inventory #: 226300)
$25.00 add to cart or Buy Direct from Bolerium Books
Share this item