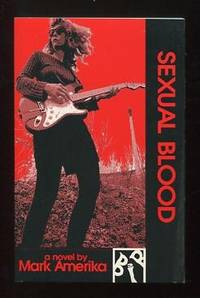 by Amerika, Mark
Boulder CO/Normal IL: Fiction Collective Two / Black Ice Books. Near Fine. 1995. First Edition. Softcover. 1573660000 . [nice tight copy, just a touch of soiling to the page edges]. Trade PB SIGNED by the author on the title page, with "Santa Monica" written in his hand at the bottom of the same page. "A wild, cybersexual trip through the dark side of America's media-manipulated consciousness. [The author] tracks the bohemian life of his main character, Mal, an alternative rock musician whose strange encounter with the Medicine Woman causes him to hallucinate a fantasy land populated by all of his former lovers." Among the author/artist/theorist's other creative achievements have been the world's first feature-length mobile phone art film ("Immobilité," 2009), the creation of a website of online art, literature and new media theory (the Alt-X Online Network), and an "auto-translation/remix" of a 1914 French novel, "Locus Solus." The introduction to a 2008 interview with Mr. Amerika described his aesthetic thusly: he "remixes personal narrative, philosophical inquiry, spontaneous theories, and cyberpunk fictions that investigate the emergence of digitally constructed identities, fictional personas, narrative mythologies, and collaborative networks." Cover blurbs by Terry Southern and Kathy Acker. Signed by Author . (Inventory #: 23967)
$20.00 add to cart Available from ReadInk
Share this item
ReadInk
Offered by

The Complete Books of Charles Fort: The Book of the Damned; Lo!; Wild Talents; New Lands

End as a Man

New York : The Vanguard Press , (c.1947)
(click for more details about End as a Man)
View all from this seller>