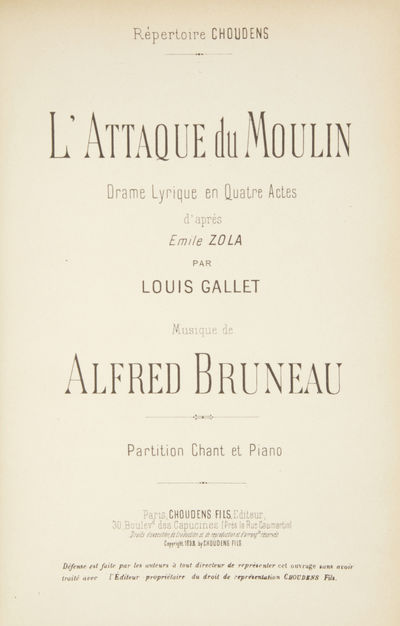 First performed in Paris to a libretto by Louis Gallet after Emile Zola at the Théâtre National de l'Opéra Comique on November 23, 1893, under Léon Carvalho.

"Bruneau's compositional approach to this opera is less imaginative than in his earlier works, if more unified .2.. The opera was widely performed throughout Europe and in the USA until the outbreak of World War I, and revived in 1922."

"Bruneau's ideas in general were constantly challenging tradition and his admiration for Wagner was based on his view that Wagner was the great liberator of 19th-century music. Although he used leitmotifs and owed a great deal to Wagner's chromatic language, his music is far less Wagnerian than that of many of his contemporaries and in his later music he used a plurality of musical languages and effects. [His] writings on music include important memoirs of Zola (Paris, 1932), a book on Massenet (Paris, 1935), essays outlining his own theory of opera (notably in Le Figaro and Rivista musicale italiana in 1897), and perceptive comments on other operas in reviews and articles." Richard Langham Smith in Grove Music Online. (Inventory #: 29271)
$115.00 add to cart or Buy Direct from
J & J Lubrano Music Antiquarians
Share this item