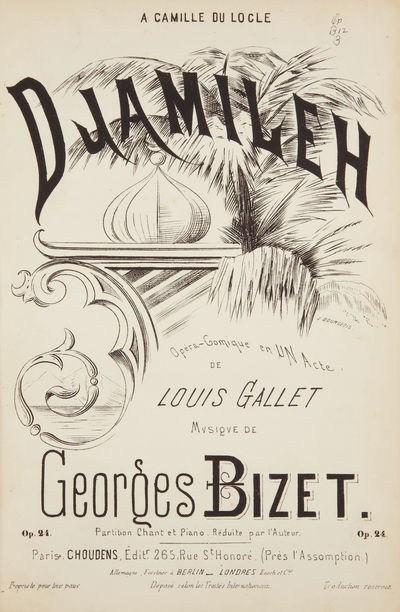 In one act to a libretto by Louis Gallet after Alfred de Musset's story Namouna, Djamileh was first performed in Paris at the Opéra-Comique (Salle Favart) on 22 May 1872.

"Bizet's score is full of inventive touches, especially in its use of chromatic colour, widely mistaken for Wagnerism in 1872. In the final duet the music takes on a more serious and passionate tone, and Djamileh is characterized from the beginning by a darkly expressive melody. Her main solo, the 'Ghazel', blends exotic colour, chromatic side-slips, suppressed passion and the key of D minor to give a strong foretaste of the Habanera in Carmen." Hugh Macdonald in Grove Music Online. (Inventory #: 29435)
$165.00 add to cart or Buy Direct from
J. & J. Lubrano Music Antiquarians
Share this item

1804
(click for more details about Manuscript collection of over 20 pieces, mostly from English operas, most for voice and keyboard, some for keyboard solo)