A Tribute to Mervyn LeRoy 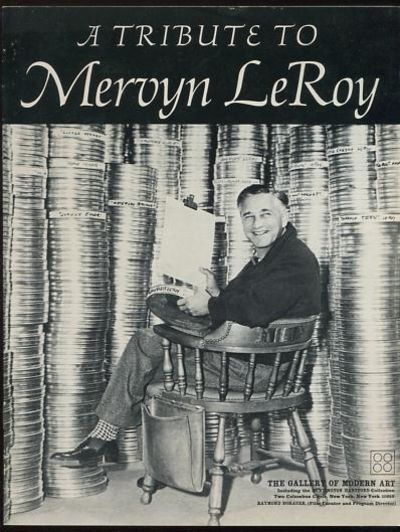 by Rohauer, Raymond
New York: The Gallery of Modern Art. Near Fine. (c.1967). First Edition. Stapled wraps. [nice clean copy, minimal handling wear]. (B&W photographs) 16-page program book (including covers) for a tribute/retrospective to the noted producer-director, then nearing the end of his active filmmaking career. (The filmography in this publication, in fact, ends with MOMENT TO MOMENT, LeRoy's last credited film, although he himself lived for another 22 years.) Five pages are devoted to an interview conducted by Rohauer; the remainder includes a filmography, numerous photographs, a list of many of his numerous awards and honors, and a brief tribute from Jack L. Warner, who states that "Mervyn, more than any other director who worked for Warner Bros., has helped shape the history of the studio." (Of course, he did make quite a few pictures for other studios, notably MGM, where he worked almost exclusively from 1938 to 1953, and produced some little pictures like THE WIZARD OF OZ.) . (Inventory #: 23973)
$25.00 add to cart Available from ReadInk
Share this item
ReadInk
Offered by