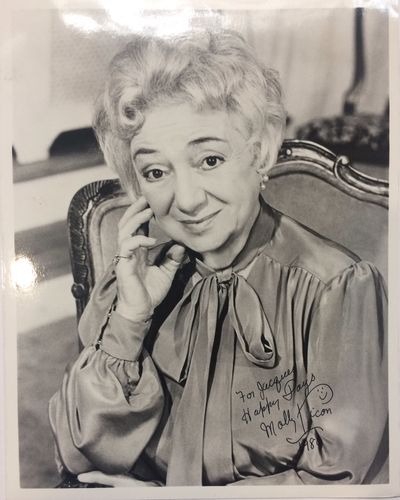 by PICON, Mollie (1898 - 1992)
1984. unbound. very good(+). American actress of stage, screen and television who was also first and foremost a star in Yiddish Theatre. Two ISP's with her smiley face signature, including a 10" X 8" image of the actress in the 1928 Warner Brothers - Vitaphone film "Temperamental Tillie" (standing), and inscribed "For Jacques - Molly Picon, 1984". This very scarce 2nd generation movie still is derived from the UCLA film and image restoration project. Also: a wonderful Sy Friedman portrait image depicting the actress posed later in life sitting in a chair smiling, inscribed: "For Jacques - Happy Days, Molly Picon, 1984", with photographers back stamp and address on verso. The first item has a very insignificant chip at the top margin, while the second is in excellent condition. (Inventory #: 284392)
$150.00 add to cart or Buy Direct from
Argosy Book Store
Share this item

Coburg : Caspar Bertschen , 1615
(click for more details about Bits with open pear rolls)
View all from this seller>