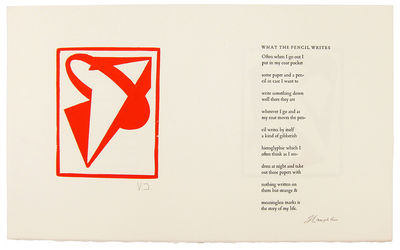 Two-sided leaf printed by the Grenfell Press during its production of THE HOUSE OF LIGHT, a 1986 collaboration between poet and publisher James Laughlin (1914-1997) and British painter and printmaker Vanessa Jackson (b. 1953). Like the book, the leaf is printed on Rives paper, the text in hand-set Monotype Poliphilus, and the prints from the original blocks. (Inventory #: 669)
$200.00 add to cart Available from
Baker Rare Books
Share this item

7 day return guarantee, with full refund including original shipping costs for up to 7 days after delivery if an item arrives misdescribed or damaged. Items must be returned in the same condition in which they were received.
More from this seller

[Glendale, California : Printed by Patrick Reagh , 1994]
(click for more details about JAY'S JOURNAL OF ANOMALIES [broadside caption title])
View all from this seller>