On the presence of histamine (beta-iminazolyl-ethylamine) in the hypophysis cerebri and other tissues of the body and its occurrence among the hydrolytic decomposition products of proteins. Inscribed copy 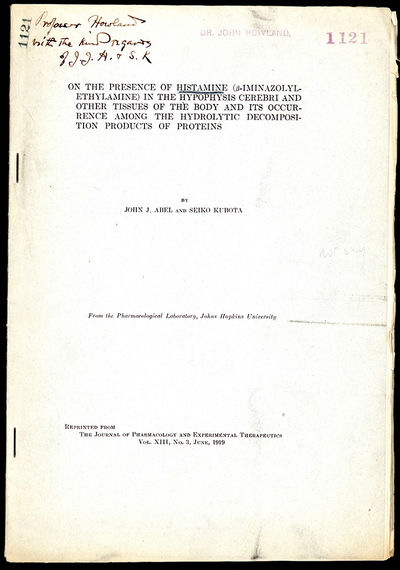 by Abel, John J. & Seiko Kubota
1919. Offprint from The Journal of Pharmacology and Experimental Therapeutics 13 (1919). 243-300pp. Original printed wrappers. Front wrapper inscribed: "Professor [John] Howland with the kind regards of J.J. A. & S. K."; Howland's stamp on front wrapper. Very good. Abel isolated histamine from the pituitary extract of animals and demonstrated its role in digestion. In the present paper, read before the American Society for Pharmacology and Therapeutics on 25 April 1919, Abel stated that "he had become convinced that all the 'motilines,' 'peristaltic hormones,' 'vaso-dilantins,' and 'histamine-like substances in tissues' described by European investigators were one and the same substance: histamine . . . Abel succeeded in isolating and identifying histamine as the pictrate in extracts of the pituitary gland. Furthermore, he isolated histamine from extracts of the gastric and intestinal mucosa . . .He summarized by saying :'It is our belief that this substance [histamine] makes its appearance wherever living protoplasm exists, or at least, wherever protoplasm is killed; in other words, that it arises wherever a tissue protein is even partially disrupted by enzumes, acids, or other hydrolytic agents'" (Davenport, A History of Gastric Secretion and Digestion, p. 170). John Howland (1873-1926), the recipient of this copy, was a director of pediatrics at Johns Hopkins and a prominent researcher into pediatric diseases and disorders; the American Pediatric Society's John Howland Award is named for him. (Inventory #: 44704)
$950.00 add to cart or Buy Direct from
Jeremy Norman & Co.
Share this item
Jeremy Norman & Co., Inc.
Offered by