American scenery; or, land, lake and river illustrations of transatlantic nature. From drawings by W. H. Bartlett engraved in the first style of the art, by R. Wallis, J. Cousen, Willmore [and others] 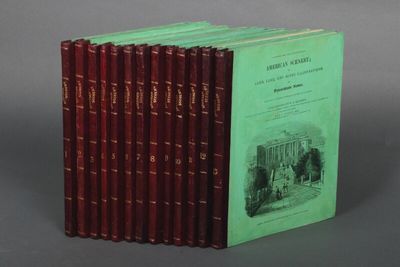 by Willis, N. P., & W. H Bartlett
London: published for the proprietors by George Virtue, 1842. 4to, 4 volumes in 13; 2 maps and over 200 fine steel engravings, list of subscribers and advertisement leaves, with the author's notice in the final volume. Bound with: Canadian Scenery Illustrated. Original quarter roan, gilt-lettered in decorated publisher's boards; occassional spotting to edges of plates. A rare set of the two works issued together and assembled from the original parts. A most appealing set of an illustrated classic, here in extended form with both the separate American and Canadian publications issued in this form as one continuous work, numbered as a coherent series on the bindings. The series in this form includes over 200 steel-engraved images. The publisher's charming binding is in particularly good condition. "The New World of Columbus...its sudden rise to independence, wealth and power" (Author's preface) is captured in this Victorian publication on the United States and "British America" (Canada) with fine engravings after the noted British landscape painter William Henry Bartlett. This is a wonderful, illustrated romp published at a time to illustrate the last days of relative freedom of the North American native peoples (Willis cites Blumenbach in analysing the "real character of the aboriginal inhabitant") and the development of the cities on the West coast of America and (unusually) Lower Canada. William Bartlett "made four voyages to the United States and Canada...the fruits of which appeared in American Scenery and Canadian Scenery" (DNB). The famous plates depict North American cities (New York, Philadelphia, Boston, Washington); important buildings such as the U.S. Bank, the Capitol, and Yale College; bridges, parks, falls, ferries, rivers; as well as fine views of Canada through Quebec, Montreal, Toronto and including Niagara Falls and Thousand Isles. Also included is an engraved portrait of Bartlett, a map of the north-eastern United States and Lower Canada. Sabin calls Canadian Scenery "the finest of Mr. Bartlett's works." Willis's ("The Literary Department") accompanying letterpress lyrically opines on the picturesque, quoting Byron's Childe Harold on sighting Niagara Falls and noting that in America the traveller may imagine "an Eden newly-sprung from the ocean". Abbey, 651 (American Scenery); Sabin, 3784, 3786. (Inventory #: 52681)
$4600.00 add to cart or Buy Direct from
Rulon-Miller Books
Share this item