The works of John Sheffield, Earl of Mulgrave, Marquis of Normanby, and Duke of Buckingham. In Two Volumes. 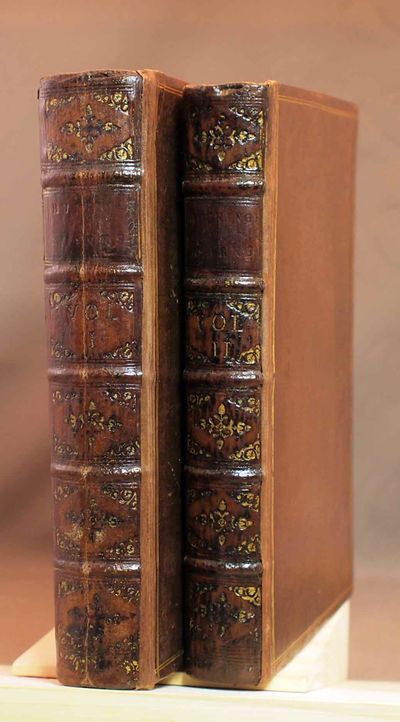 by Buckingham, John Sheffield, Duke of.
London: Printed for J[ohn] B[arber] and sold by Aaron Ward, etc., 1729. Second edition, corrected. Memorial volumes published upon the death of Dryden's patron John Sheffield, the Duke of Buckingham, first published in 1723. Two of Sheffield's essays ("Feast of the Gods," and "Some Account of the Revolution") were left out of the memorial, and they have been bound in after the text here from a separate publication.. Octavo (21cm); 2 volumes. xvi, 400; iv, 272, xliv (i.e., xlii) pages, 2 folding engraved frontispieces, 10 half-page engraved vignettes with historiated initials, and five half-page engraved tail-pieces. Bound in contemporary polished leather ruled in gilt, with gilt-tooled spine in six compartments. Fissure in spine of volume 1. Gilding perished from leather title labels. Upper joints of both volumes reinforced with Japanese paper. Contemporary and later bookplates. (Inventory #: 5993)
$120.00 add to cart Available from
Rodger Friedman Rare Book Studio
Share this item
Rodger Friedman Rare Book Studio
Offered by