Early patent for airship "combination of plane and hot-air dirigible 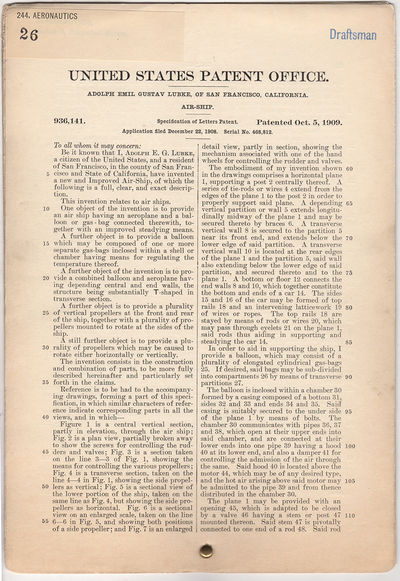 by Awarded to Adolph Lubke
Washington DC: United States Patent Office, 1909. Wraps. Very good. The six page original patent is printed on thin cardstock with three pages of text and three pages of technical illustrations. It was awarded to Adolph Lubke, a resident of San Francisco, California. The leaves bear patent office file labels in the upper left corner that read, "244. AERONAUTICS / 26" and handstamps in the upper right corner that read, "Draftsman." They are fastened together at the bottom by an old brass paper fastener.

A 1909 issue of Aeronautics describes Lubke's proposed airship as follows: "Device consists of a combination of plane and hot-air dirigible. Under a large flat plane is a gas bag, divided in compartments, with schemes for supplying heated air, changing its temperature, etc. Horizontal and vertical rudders. Motor and propellers in frame hung below bag and plane." Airships are lighter-than-air aircraft that can navigate through the air under their own power as opposed to hot air balloons which simply float through the sky and must adjust their altitude to take advantage of varying air currents to change direction. The first engine-powered airship flights occurred in 1872 and in 1874, and the first U.S. airship patent was issued, however, whether or not any test flights actually occurred is a subject of debate. Experimentation continued throughout the last years of the 19th century, and in the first years of the 1900s, Count Zeppelin of Germany created the first truly successful dirigibles.

The possibility of airship travel captivated the public's imagination, and beginning the 1880s, airship science fiction became quite popular with, perhaps the best-known stories being Jules Verne's Robur the Conqueror, Rudyard Kipling's With the Night Mail, and the Frank Reade dime novel series.

Although few successful airships were known to have been built at this time, "mystery airship" sightings-some of which were in California-began to occur with periodic frequency in 1896 and continued until about 1913. Although some were undoubtedly imagined, it is likely that a number of sightings were of aircraft made by hopeful inventors. (See various Wikipedia articles.)

There is no evidence that a prototype of Lubke's airship was ever made, much less flown, however only minuscule information appears on-line, making Lubke and his proposed aircraft certainly worthy of further research. (Inventory #: 009106)
$200.00 add to cart or Buy Direct from
Read'Em Again Books and Paper
Share this item