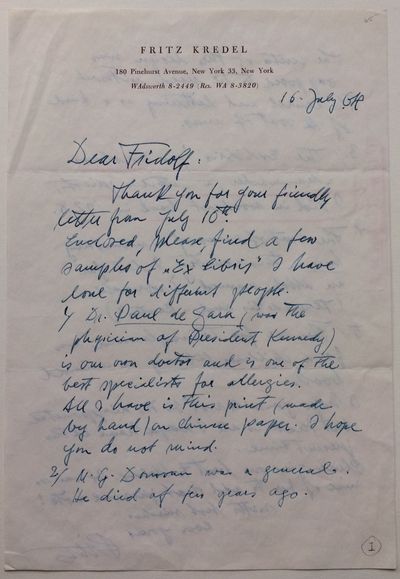 by KREDEL, Fritz (1900-1973)
New York, 1964. unbound. very good(+). A.L.S. 4to. 2 full pages, personal letterhead, New York City, July 16, 1964, sending the recipient Ex-Libris plate designs, in part: "...Dr. Paul de Zarn (was the physician to President Kennedy) and is our doctor and is one of the best specialists for allergies. All I have at this point is this print (made by hand on Chinese paper). I hope you do not mind. William G. Donovan was a General. He died a few years ago. The center of his design was supposed to be used without lettering... as a kind of Coat of Arms..." Boldly signed and in very good condition. German-born American artist and graphic designer who studied under Rudolph Kock. *Donovan was the founder of the OSS- the precursor of the CIA. (Inventory #: 285139)
$100.00 add to cart or Buy Direct from
Argosy Book Store
Share this item