MERCURIUS POLITICUS: BEING MONTHLY OBSERVATIONS ON THE AFFAIRS OF GREAT BRITAIN, WITH THE MOST MATERIAL OCCURRENCES IN EUROPE FOR THE MONTH OF APRIL, 1717 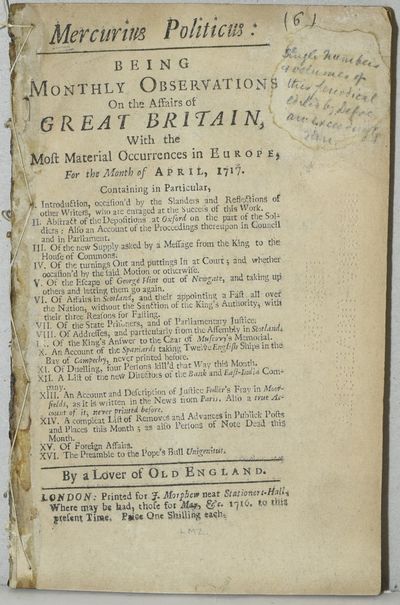 by A Lover of Old England [Daniel Defoe]
London: Printed for J. Morphew near Stationers-Hall, 1717. First Edition. Original Sewn Wrappers. Good binding. One of Defoe's infamous pamphlets, published under his second period of employment by the British government as a literary fifth columnist. Defoe would publish political or current event pamphlets, either anonymously or posing as a Whig, Tory, Jacobite, whom he said "my very soul abhors" (DNB 738), or even a repentant double agent, all while writing revolutionary works that lacked their bite, incendiary news which proved incorrect, or polemical pieces with unsound arguments. In short, he worked a a pamphleteering agent of chaos, all in the service of the government, pacifying their erstwhile opponents. Defoe was seen as a renegade, traitor, and spy by a number of his contemporaries: "the little art he is truly a master of, of forging a story and imposing it on the world." (DNB 737). Mercurius Politicus was published in the years shortly before his fantastical Robinson Crusoe. The periodical ran from May 1716 to December 1720. This being the April, 1717 issue. With "An Account of the Spaniards taking Twelve English Ships in the Bay of Campechy [sic], never printed before," as well as new appointments for the Bank and the East-India Company, and updates on the Jacobite situation in Scotland. Sewn pamphlet, lacking original paper wrappers. 211-273 pp. An ex-library copy, with a punch-stamp, dampstain, and writing on the title page, not affecting the text; library stamp on the verso of the title page. (ESTC P2105. DNB V, 737-738). Good binding. (Inventory #: 284581)
$450.00 add to cart or Buy Direct from
Black Swan Books
Share this item

Harrisburg PA : Wm Stanley Ray, State Printer , 1916
(click for more details about REPORT OF THE COMMISSION TO LOCATE THE SITE OF THE FRONTIER FORTS OF PENNSYLVANIA (2 volume set))

HISTORY OF THE BACKWOODS; or, THE REGION OF OHIO: Authentic, from the Earliest Accounts, Embracing Many Events, Notices of Prominent Pioneers, Sketches of Early Settlements, etc, etc.

by A. W. Patterson

Lewisburg PA : Wennawoods Publishing , 2006
(click for more details about HISTORY OF THE BACKWOODS; or, THE REGION OF OHIO: Authentic, from the Earliest Accounts, Embracing Many Events, Notices of Prominent Pioneers, Sketches of Early Settlements, etc, etc.)
View all from this seller>